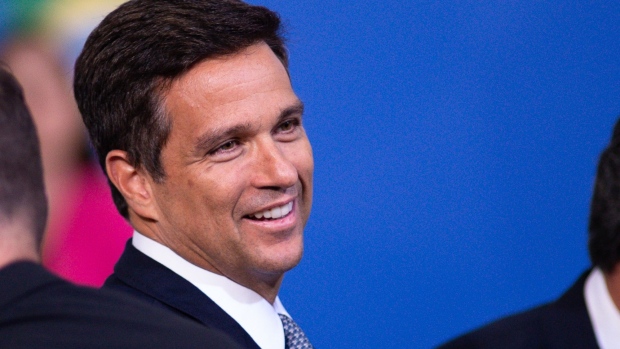 Roberto Campos Neto, Brazil's Central Bank president, arrives before the start of a press conference at Planalto Palace in Brasilia, Brazil, on Wednesday, May 25, 2022. President Jair Bolsonaro’s decision to fire a third chief executive officer at Petrobras shows just how crucial it is for the Brazilian president to avoid another increase in fuel prices that could all but kill his re-election chances in October. , Bloomberg

(Bloomberg) -- Brazil’s central bank chief Roberto Campos Neto said policy makers are aiming for inflation below 4% next year as part of their efforts to bring it near the 3.25% target.

“For us, around the target means under 4%,” he said at an online press conference on Thursday, clarifying language used in the statement that accompanied last week’s interest rate decision. “If it’s 4%, then we understand that we have to act. We don’t have an exact number. It’s part of a strategy.”

Persistent price shocks have forced Brazilian policy makers to extend a tightening cycle that has added 11.25 percentage points to borrowing costs in just over a year. Still, annual inflation has remained above 10% since September on the back of firmer consumption and higher global commodity costs. Central bankers have said they expect their rate hikes to have a stronger effect on the economy starting in the second half of this year.

Board members are focused on next year’s target, Campos Neto said, adding that 2024 has not yet been considered in their policy horizon.

Brazil’s central bank lifted rates to 13.25% on June 15 and signaled another increase of 50 basis points or less in August. Many economists are betting borrowing costs can reach 14% and remain in the double digits next year.

Policy makers’ strategy is to keep the benchmark Selic at a higher level for longer to ensure that inflation falls back around the target, central bank Economic Policy Director Diogo Guillen said at the same press conference.

Soaring cost of living has become a major obstacle to President Jair Bolsonaro’s re-election in October. Trailing in polls, he has pledged to investigate Petrobras and has proposed measures to lower taxes on fuel. He is now considering whether to raise cash handouts to the poor.

Policy makers have said cuts on fuel taxes are likely to cool inflation this year only to boost it in 2023, but they won’t incorporate the impact of such measures in their projections until they’re in effect.

On Thursday, the central bank also lifted its 2022 economic growth estimate to 1.7% from 1% previously, citing a stronger-than-expected first quarter, including a boost from exports and family consumption.