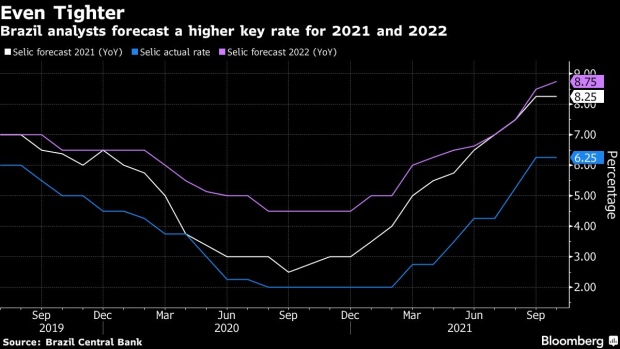 (Bloomberg) -- Brazil’s central bank can alter the pace of its borrowing cost increases, a board member said on Wednesday, prompting interest rate futures to rise.

“It could accelerate or it could decelerate,” economic policy director Fabio Kanczuk at an event for investors organized by HSBC. “Our 100bps pace is a hint, not a commitment. You see the new data, and you analyze it again. Things are changing all the time.”

Brazil’s central bank has been the most aggressive in the world, lifting the benchmark Selic by 425 basis points since March, to 6.25%. Policy makers are combating above-target inflation driven by a reopening economy and higher electricity bills. The monetary authority is expected to deliver its third consecutive full percentage point hike on Oct. 27.

Swap rates on the contract due January 2023, which indicate investor expectations for monetary policy, rose 3.5 basis points in morning trading. It was the most traded contract in Sao Paulo.

Annual inflation in Latin America’s largest economy hit 10.25% in September. Central bankers see the current pace of tightening as “more than enough” to bring inflation back to their target in 2022, said Kanczuk.