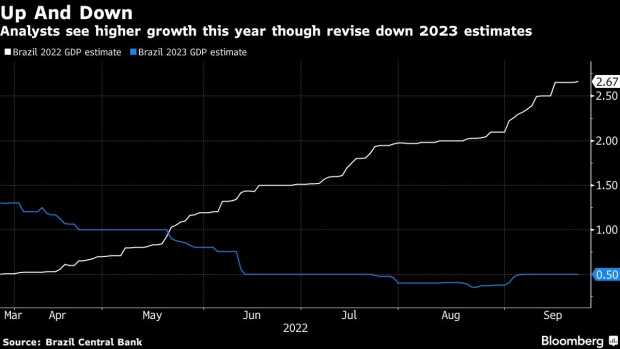 A Brazilian flag hangs above bolts of fabric at a textile factory in Natal, Rio Grande do Norte, Brazil. , Bloomberg

(Bloomberg) -- Brazil central bank President Roberto Campos Neto said interest rate cuts starting in June would be in line with plans of bringing inflation around target, as policymakers warn of a growth slowdown next year.

When taking into account projections from the bank’s weekly economist survey, which points to borrowing cost reductions starting in the middle of 2023, Brazil would be able to bring consumer prices around the official goal, Campos Neto said at a virtual press conference on Thursday.

“With the first rate cut in June, we accomplish our goals,” he said, adding that the bank’s recent cycle of rate hikes is having an effect on the economy.

“Looking at swap rates, seeing what’s priced in and comparing to the weekly survey, the difference is small,” he said. “Break-even inflation has fallen recently.”

Earlier on Thursday, the bank raised its 2022 growth forecast to 2.7% from 1.7% in June, according to its quarterly inflation report. Still, the monetary authority said it sees expansion at 1% next year, reflecting a global downturn and local borrowing costs that are currently near a six-year high.

Economists in the survey see gross domestic product growing 2.67% this year and 0.5% next.

Policymakers led by Campos Neto are holding rates steady at 13.75% after an 18-month long cycle of aggressive borrowing cost hikes. Two out of the nine board members voted last week for another rise to “strengthen” efforts to bring inflation to target. On the other hand, directors said the full effect of tighter monetary policy has yet to be seen in the economy.

In their report, central bankers wrote family consumption will increase 3.9% this year, above the prior forecast of 1.7%, as job wages and extra earnings from new fiscal stimulus boost disposable income. Real salaries should continue to improve in coming months, given the country’s indexation policies.

The bank’s inflation estimates were kept unchanged from the minutes of their September policy meeting, at 5.8% for this year and 4.6% in 2023, both above targets. Consumer prices are expected to rise 2.8% in 2024, within policymakers’ tolerance range.

The central bank reiterated it will remain vigilant and assess if keeping the interest rate high for a “sufficiently long period” is enough to bring inflation back to target. They remain concerned about rising services prices and cost-of-living measures that are still above historic averages.

At the same time, many analysts are lifting their 2022 growth estimates despite a hiking cycle that added 11.75 percentage points to borrowing costs. Gross domestic product grew more than expected in the second quarter, while unemployment has dropped to the lowest since 2015.

Brazilians will vote in the first round of presidential elections on Sunday, and the economy is a top focus point. Both incumbent Jair Bolsonaro and former President Luiz Inacio Lula da Silva back greater social spending, pledging to boost payouts to the poor.