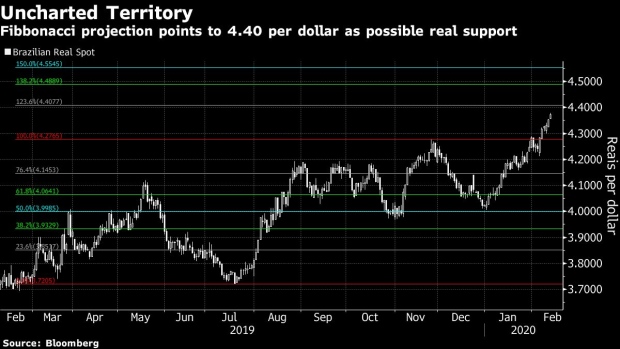 (Bloomberg) -- Brazil’s central bank stepped in to prop up the currency after a rout that sent it to a record low and earned it the title of worst performer in emerging markets this year.

The monetary authority auctioned $1 billion in foreign-exchange swaps on Thursday, all the 20,000 contracts offered. The real erased losses of as much as 0.65% after the announcement of the auction, which came after several statements from policy makers that they were comfortable with the current level of the currency.

The real has successively reached all-time lows since Jan. 31, when it breached the previous record and fell past the level at which the central bank last sold dollars in the spot market to prop up the currency in November. Fibonacci projections point to 4.40 per dollar as the next support for the real, but pivots need to be tested before becoming a level to watch.

“I struggle to see this as a game-changer for the real,” said Alvise Marino, a currency strategist at Credit Suisse in New York. “Brazil is still the one country in EM with hikes priced in, which makes the currency vulnerable to further shocks to the growth outlook.”

Investors are warming up to the idea that the currency can continue to weaken even as other local assets rise, Marino said. Also, the real isn’t undervalued when considering real effective exchange rate, he said.

It was the third time the central bank announced an intervention in just a few days, or even hours, after downplaying chances of such a move. On Wednesday, President Roberto Campos Neto defended the floating foreign-exchange regime and said authorities would intervene in case they spotted an imbalance in the market. Last night, Economy Minister Paulo Guedes also said he saw no problem with a slightly depreciated currency.

Earlier on Thursday, President Jair Bolsonaro told reporters that he personally thought the currency was a bit weak.

The real is down 6.7% this year and is the worst performer among 31 major currencies tracked by Bloomberg due to its diminished carry appeal as interest rates were cut to a record low of 4.25%. Market positioning also is weighing on the currency, which is often used as a hedge for those long stocks and receiving rates -- a trade that profits from falling interest rates, and has gained momentum amid disappointing economic data.

--With assistance from Davison Santana.

To contact the editors responsible for this story: Carolina Wilson at cwilson166@bloomberg.net, Julia Leite