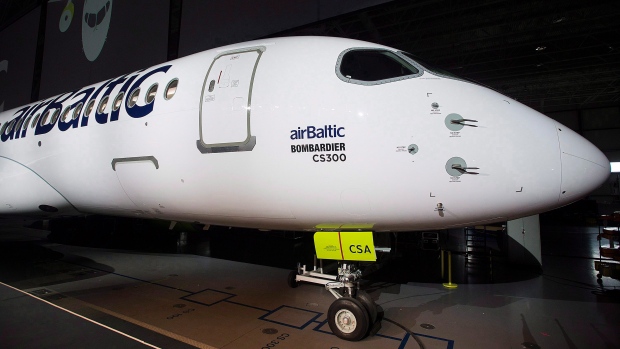 Bombardier CS300 is shown during a ceremony to mark the first delivery of the commercial jetliner to Air Baltic in Mirabel, Que., Monday, November 28, 2016. The largest aircraft ever made by Bombardier is about to carry passengers after being delivered to Air Baltic. , The Canadian Press/Graham Hughes

BRASILIA/SAO PAULO  - Brazil opened a formal complaint against Canada at the World Trade Organization (WTO) on Wednesday, accusing the country of distorting the global aerospace industry with subsidies for planemaker Bombardier Inc.

Brazil has threatened for months to open the WTO process, arguing that support for Bombardier's (BBDb.TO) new CSeries was undercutting the market for commercial jets made by Brazilian rival Embraer SA.

The case builds on decades of antagonism between the two regional jet makers and echoes arguments in the world's largest trade dispute, a transatlantic spat over government support for Boeing Co and Airbus Group SE.

Brazil's action came on the heels of fresh support for Bombardier on Tuesday in the form of interest-free loans worth $373 million from the Canadian government. Canada's Trade Minister Francois-Philippe Champagne said the loans complied with WTO rules and the government would defend itself against litigation.

Brazil's Foreign Ministry cited additional funding for Bombardier in a statement on Wednesday, criticizing "at least $2.5 billion in government support" for the Canadian planemaker in 2016.

"It is the understanding of Brazil that these Canadian subsidies artificially affect international competitiveness," the ministry said in a statement. "New support that has been announced could further deepen the distortions in the aerospace sector in detriment to Brazilian interests."

Embraer Chief Executive Paulo Cesar Silva said in a statement that the ongoing cash injections "have not only been fundamental in the development and survival of the CSeries program, but have also allowed Bombardier to offer its aircraft at artificially low prices."

WEIGH IN: What’s your reaction to Ottawa’s loan program for Bombardier? https://t.co/bxT76O6lte

Last year, Bombardier scored an order from Delta Air Lines Inc for 75 CSeries jets, worth some $5.6 billion at list prices, beating out Embraer's competing E-Jets with below break-even prices, according to the Brazilians.

Two sources familiar with the deal said Bombardier offered a roughly two-thirds discount to win the order, its biggest to date for the fledgling CSeries program.

Bombardier booked a $500 million "onerous contract" charge related to that Delta order and a separate deal with Air Canada.

On Wednesday, Bombardier referred to comments by Chief Executive Alain Bellemare saying investments from Quebec and Canada's federal government are both WTO compliant.

"We have the best aircraft in the CSeries," Bellemare told reporters at a company plant in Montreal on Tuesday. "So people are finding ways to come after us. It's okay. We will continue to compete successfully."

Both countries now have up to 60 days to try to settle the dispute before the WTO convenes a panel of experts to help make a ruling in the case.

The latest WTO standoff follows nearly a decade of sparring between Brazil and Canada over state financing for Embraer and Bombardier's exports in the 1990s.

However, the current dispute is closer in substance to the clash between the United States and the European Union over allegedly unfair support for Boeing and Airbus.

Embraer will be keen to build on a partial U.S. victory in that case, which focused on comparing public financing for aircraft development with private-sector benchmarks to determine whether the loans constituted improper subsidies.

The WTO ruled that loans to Airbus were unfair but stopped short of putting them in the worst category of "prohibited" aid." The dispute, which started more than a decade ago, has still not completed a lengthy WTO compliance process.