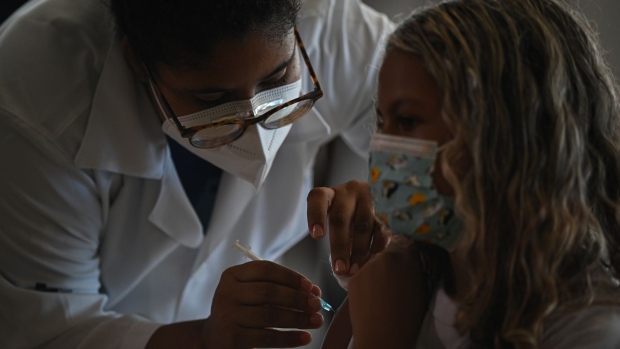 A healthcare worker administers a dose of the Pfizer-BioNTech Covid-19 vaccine to a child at the Museu do Amanha (Museum of Tomorrow) in Rio de Janeiro, Brazil, on Monday, Jan. 17, 2022. Health Minister Marcelo Queiroga said Brazil will aim to have 20 million doses for children by the end March. , Bloomberg

(Bloomberg) -- The kick off of child immunizations against Covid in Brazil this week has given rise to a growing hesitancy to shots in a country known for excelling in mass vaccinations.

A Datafolha poll released this week showed that 17% of Brazilians don’t support vaccinating children aged 5-11 against Covid. That number rises to 21% among those that have completed high school, and 28% among the richest.

While still a small minority, it’s a new development in a country where vaccinating children has always been a habit. Every year, parents take newborns to get shots against everything from measles to meningitis with few questions asked.

The success in mass immunizations is credited by experts partially to a far-reaching public healthcare system, which proved effective even with Covid despite years of under-investments. The system, known as SUS, helped Brazil boast of a 95% immunization level in 2015. But that number began to fall even before the pandemic, hovering around 85% as parents became less worried with diseases such as polio, said Renato Kfouri, a pediatrician who is also the president of Brazil’s Immunizations Society.

He’s concerned that the distrust in vaccines from authorities and the perception that Covid-19 is no longer fatal will make the overall levels drop even further.

While Brazil started immunizing its 212 million people a year ago, it only just made doses available to children older than 5 after a heated debate led by Jair Bolsonaro. The president, who is unvaccinated himself, has questioned the safety and efficacy of the shots from the start, bashing the regulator’s decision to approve Pfizer Inc. shots to children and saying he will not vaccinate his 11-year-old daughter.

“Brazil seemed immune to the anti-vaccine movement. But a president who bashes vaccines and science ended up finding an audience,” Kfouri said.

The resurgence of the virus as omicron becomes predominant has rekindled the discussion on vaccinations, which is even more divisive when it comes to children, who are set to return to school in February following summer holidays in the Southern hemisphere.

Eight out of 10 parents in Sao Paulo, Brazil’s most populous state, said they’ll will immunize their kids, according to a survey by the state’s Data Analysis System, known as Seade. The support is higher among parents whose children are enrolled in public schools: 91%. Among those responsible for children in private institutions, the rate is 78%.

The divide showed this past week, when parents of students from the American School of Rio de Janeiro, one of the most expensive private schools in the country, made an on-line petition opposing a vaccine requirement for kids to attend in-person activities. The incident made headlines in local media, and the petition has collected over 700 signatures. Representatives from the school declined to comment about its vaccine rules.

“The richest are less vulnerable,” said Maria Paula Ferreira, head of social research in Seade. “The burden of disease for them is smaller and they have access to other forms of treatment in case they get infected.”