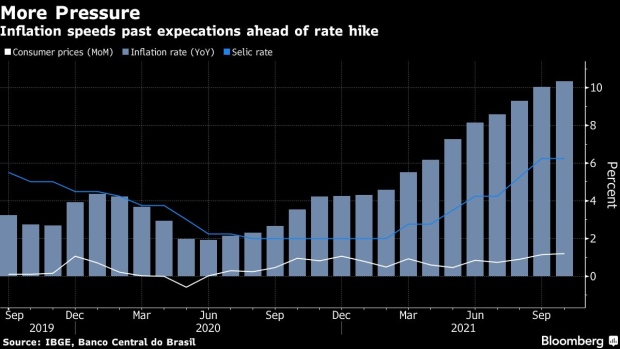 (Bloomberg) -- Brazil’s inflation sped up more than expected in early October as the central bank prepares to increase the pace of its interest rate hikes to counter greater public spending.

Consumer prices jumped 1.2% from the month prior and 10.34% from a year ago, the national statistics institute reported on Tuesday. Economists in a Bloomberg survey expected a 1% increase from mid-September.

Transportation and housing costs, which increased 2.06% and 1.87% respectively, were the main contributors to the price jump, the statistics agency said.

Brazil’s central bank is under increasing pressure to clamp down harder on inflation after President Jair Bolsonaro said he would expand cash-transfer programs to the poor before next year’s elections. Policy makers have already lifted rates by 425 basis points this year amid higher electricity and food costs. Traders are betting on a hike of at least 150 basis points on Wednesday.

The bank had previously signaled that a full-percentage point rise was on tap this week as it works to bring consumer prices to its target of 3.5% for 2022. Still, last week’s announcement that the government would seek to circumvent a constitutionally-mandated budget limit renewed bets of faster inflation.

Economists expect Brazil’s consumer prices to end next year at 4.40%, according to a survey by the central bank published Monday. Analysts also raised their 2023 forecasts above that year’s target of 3.25%.