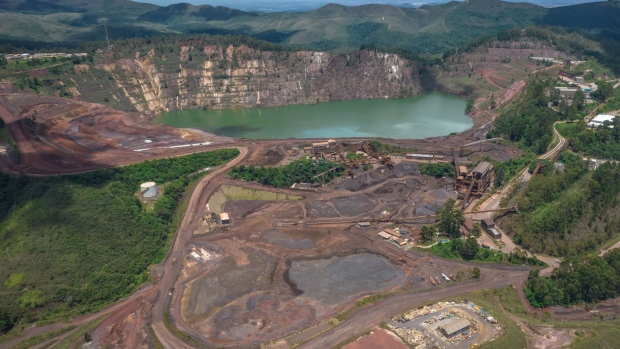 Residents survey damage after a Vale SA dam burst in Brumadinho, Minas Gerais state, Brazil, on Saturday, Jan. 26, 2019. A Brazilian judge has blocked 1 billion reais ($265 million) from Vale SA while environmental authorities imposed a $66 million fine on the miner after a tailings dam it owns burst on Friday in the second deadly accident in the same mining region in just over three years. , Bloomberg

(Bloomberg) -- Vale SA’s giant iron ore mines are bouncing back quickly from several days of heavy rain in southern Brazil, with annual output guidance intact. But the deluge has brought back into focus a far greater risk for the world’s No. 2 producer: tailings dams.

In the three years since the Brumadinho dam disaster that killed 270 people, Vale has been working hard to de-risk its waste storage, forsaking production volume to bolster safety in a largely successful bid to close a valuation gap with its major rivals. But last week’s rains showed tailings remain the Achilles heel of the Rio de Janeiro-based producer.

After the Brumadinho collapse, the authorities prohibited the construction of so-called upstream dams, typically the cheapest way to contain ponds of tailings waste and considered the most dangerous. Miners have yet to shut most of them, and the rains in the ore rich Minas Gerais triggered safety concerns again. Companies including Vale halted mining operations, affecting about 1.8 million metric tons of iron ore exports from the state.

“After the dam tragedies of Mariana and Brumadinho it became clearer that we have a kind of bomb here to explode at any moment,” Jarbas Soares Junior, Attorney General of Justice of Minas Gerais state, said in an interview. “What happened at Vallourec (a dike overflow) shows the system is still fragile.”

The risk to supply lifted iron futures, before Vale said on Monday that its operations have partially resumed production.

The Brazilian mining regulator known as ANM and the Minas Gerais government ordered the “decharacterization” of upstream structures after Brumadinho. That’s the last phase of a dam’s decommissioning. Most of the miners will miss the Feb. 25 deadline.

Brazil has 446 tailings dams on its national dam safety policy, of which 65 are upstream dams. Three are at imminent risk of collapse, according to ANM.

Only five out of 54 upstream dams have been disabled in Minas, according to FEAM, the state’s environmental agency. State law doesn’t determine penalties for those who fail to comply with the deadline, though FEAM is considering lawsuits. On the federal level, ANM says the miners must request a postponement or will they will be fined.

Since 2019, Vale has eliminated seven upstream dams nationally, but there are 23 remaining. Vale keeps provisions of about 10 billion reais ($1.8 billion) for its dam decharacterization program, which will be completed by 2035. Vale says preventive, corrective and monitoring actions at the dams have been intensified, and that it’s committed to eliminating all of its upstreams dams to ensure disasters such as Brumadinho never happen again.

“As the interventions can represent increased risks, for dams with the most critical alert level (level 3), Vale built large containment structures to protect the communities that live nearby and enable the works to be carried out more safely,” the company said in a statement. No dam is expected to be in critical safety condition by 2025.

Mining-industry groups have said that guaranteeing total safety and complying with the deadlines isn’t possible for all dams. Speeding up complex projects can bring safety risks, according to Minas Gerais Industry Federation (Fiemg) and the miners association Ibram.

Carlos Martinez, an engineer and professor at the Federal University of Itajubá, said mining companies are investing in safer and more sustainable alternatives for waste from mineral production, but the liability is enormous.

“There are changes taking place, but very slowly,” said Martinez. “New legislation came with delays, with unfeasible deadlines. We’ll have to live with these risks for another seven to 10 years, until all upstream dams are gone.”