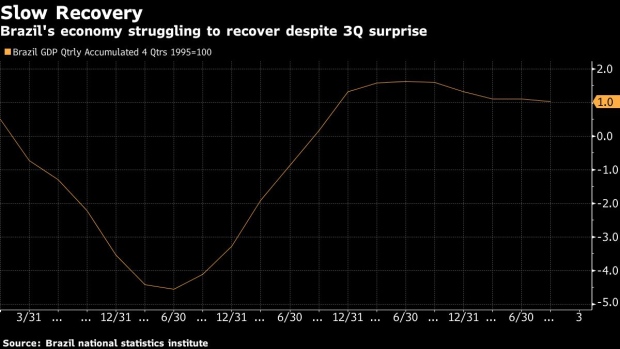 (Bloomberg) -- Brazil’s economy grew more than forecast in the third quarter as a broad-based expansion led by private investments and agriculture more than made up for a reduction in government spending.

Gross domestic product rose 0.6% from the previous three-month period, compared with a 0.4% estimate from analysts in a Bloomberg survey. From a year ago, GDP increased by 1.2%. The national statistics agency also revised up 2018 growth to 1.3%.

The numbers are a boost to President Jair Bolsonaro’s administration as it works to strengthen Latin America’s largest economy. The central bank has signaled it will cut borrowing costs for the fourth straight time next week to buttress demand. A decision to free up billions of reais from workers’ severance funds should also help growth in the fourth quarter. Forecasts for 2020 have already started to edge up.

Quarterly output was driven by a 2% increase in investments as well as a 1.3% rise in agriculture. Meanwhile, government spending dropped by 0.4% and exports fell by 2.8%, according to the statistics agency.

“Brazil’s economy is in a trajectory of recovery, and signs of that recovery should strengthen in the short term,” said Flavio Serrano, chief economist at Haitong. “The data doesn’t change the central bank’s strategy for next week. It does increase the chance that there will be no more rate cuts after that one.”

Brazil has been slow to overcome a raft of domestic and international headwinds that have weighed on growth and blunted Bolsonaro’s pro-market policy push. Well over 12 million people are unemployed and millions more have turned to informal labor in order to eek out a living.

Brazil’s commodity-driven economy has been hampered by a slowdown in global growth. It was sucked into the global trade wars on Monday when U.S. President Donald Trump said he’ll reinstate tariffs on the country’s exports of steel and aluminum.

Within Latin America, however, Brazil is starting to pull away from other large nations such as Mexico, which is forecast to stagnate this year, and Argentina, which is mired in a deep recession. By comparison, Brazil is seen expanding by roughly 1% this year and by 2.2% in 2020.

Amid the dour backdrop, the central bank has cut the benchmark Selic rate to an all-time low of 5% and indicated another reduction of a half-point is in the pipeline at its next monetary policy decision on Dec. 11. Still, in recent weeks the real has weakened, fanning inflation concerns, and policy makers have indicated that any reductions beyond this month will be made with caution.

Brazil’s GDP is expanding more vigorously and private sector growth will continue to accelerate, the economy ministry wrote in a statement after the data was released. It added that economic policies will have a greater impact next year.

“GDP surprised on the upside in 3Q, providing a piece of positive and relieving news. Although growth remains rather lackluster and insufficient to bring the economy back to its potential level, the fact that it gained speed, even if only modestly, helps reassure that economic policy is on track to bring growth.”

Swap rates on the contract maturing in January 2021, which serves as a gauge of financial market expectations on monetary policy, fell 1 basis point as the data did not change bets on another rate cut this month.

To contact the editors responsible for this story: Walter Brandimarte at wbrandimarte@bloomberg.net, Matthew Malinowski