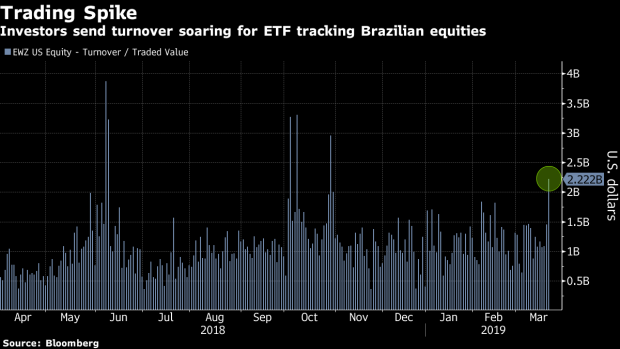 (Bloomberg) -- The biggest exchange-traded fund tracking Brazilian equities slumped after former President Michel Temer was arrested amid a sweeping corruption probe that raised concern over the approval of a key pension overhaul in Congress.

The $9 billion iShares MSCI Brazil ETF fell as much as 4.4 percent Thursday, and trading volume surged. More than 55 million shares worth $2.4 billion exchanged hands as of 3:29 p.m. in New York, already pushing the EWZ’s turnover to the highest since October and more than double the daily average daily of the past year.

“The market is worried about the social security reform,” with investors wondering whether personal politics will get in the way of the bill, according to Greg Lesko, a money manager at Deltec Asset Management in New York. “Not sure I think it will, but the market is nervous.”

Concern about the government’s ability to approve the overhaul was already on the rise after a separate proposal for military pensions displeased investors and government allies on Wednesday. President Jair Bolsonaro’s efforts to boost the economy depend on his ability to get enough support for the reform.

To contact the reporters on this story: Vinícius Andrade in São Paulo at vandrade3@bloomberg.net;Carolina Wilson in New York City at cwilson166@bloomberg.net

To contact the editors responsible for this story: Courtney Dentch at cdentch1@bloomberg.net, Rita Nazareth, Rachel Evans