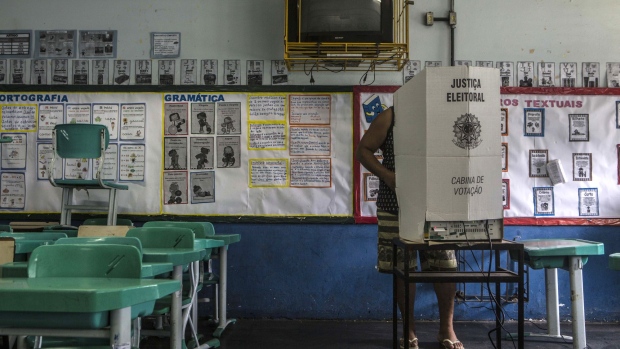 A voter casts a ballots inside a polling station during the first round of presidential elections in Rio de Janeiro, Brazil, on Sunday, Oct. 7, 2018. Brazilians are putting their young democracy to a political stress test, going to the polls deeply divided after years of corruption and recession have pummeled faith in their institutions. , Bloomberg

(Bloomberg) -- A flood of opinion surveys is being released ahead of Brazil’s general elections on Oct. 2, which pits incumbent President Jair Bolsonaro against leftist challenger Luiz Inacio Lula da Silva. There are more than 140 of them registered with the country’s electoral court, though the majority are for downticket races or state-by-state analysis of presidential votes.

Polls widely show Lula winning, with some pointing to a growing chance he could squeak out an outright win on Sunday. For that, he would need to get more than 50% of the votes excluding annulled ballots and those cast blank. If that’s not the case, the race will go to a runoff on Oct. 30.

Plenty could change before election day, especially with campaigning still underway and a final televised presidential debate slated for Thursday evening. Brazil doesn’t restrict the release of polls close to the vote, with several expected for Saturday.

Here’s some of the main national polls on the presidential race to watch out for in the final week: