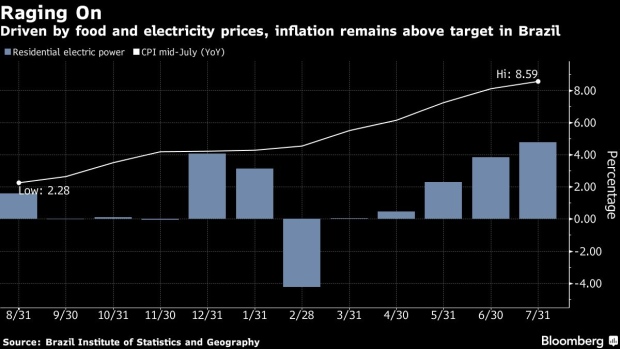 (Bloomberg) -- Brazil’s central bank lifted its key interest rates by a full percentage point, its biggest hike since 2003, and promised another increase of the same magnitude in September as the country’s economic reopening and a severe drought raise market expectations that inflation will remain above target through next year.

Policy makers lifted the Selic to 5.25% on Wednesday, as forecast by all but two of the 41 analysts surveyed by Bloomberg. The remaining economists forecast a fourth straight increase of 75 basis points.

“For the next meeting, the committee foresees another adjustment of the same magnitude,” policy makers wrote in a statement accompanying the decision. “Future policy steps could be adjusted to ensure the achievement of the inflation target.”

Brazil’s central bank, led by its President Roberto Campos Neto, has been among the most aggressive in the world, boosting rates by 325 basis points since March. But price pressures are mounting as local officials roll back the last few virus restrictions in place, forcing policy makers to make an even stronger effort to hit next year’s inflation target.

“In Brazil, inflation drivers include food staples and the effects of the climate crisis seen from the drought,” Alejandro Cuadrado, Latin America strategist for Banco Bilbao Vizcaya Argentaria SA, said ahead of the rate decision. “Brazil is the only country in the region that has truly been aggressive” on rates.

Annual inflation hit 8.59% in mid-July, above this year’s 3.75% goal. Analysts surveyed by the monetary authority see consumer prices above target both this year and next even as they expect borrowing costs to rise to 7% by December.

While the virus is still killing almost 1,000 people in Brazil a day, that’s down from a peak of more than 4,200. Hospital occupancy rates have plummeted, with intensive-care units across the nation about 60% to 65% full, down from more than 95% earlier this year.