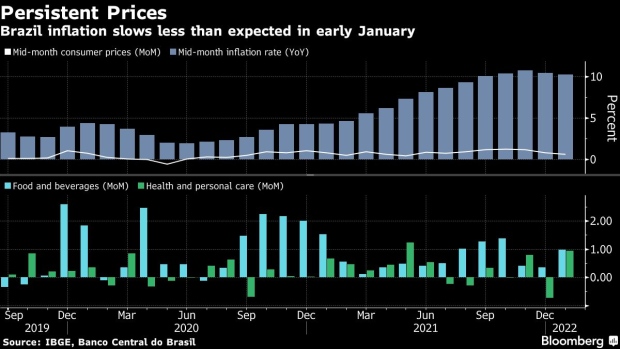 (Bloomberg) -- Brazil’s annual inflation slowed less than expected in early January, disappointing investors and underscoring the persistent price pressures the central bank faces as it prepares to hike its interest rate next week.

Prices rose 10.20% from a year ago, above the 10.05% median forecast in a Bloomberg survey. On the month, they rose 0.58%, the national statistics agency reported on Wednesday.

The central bank, led by Roberto Campos Neto, has deployed some of the world’s most hawkish monetary policy in the wake of the pandemic, lifting rates 725 basis points since March. Higher borrowing costs, though, have so far failed to significantly cool red-hot inflation even as the economy struggles through recession.

“The first inflation print in the year shows more reason for concern than celebration, in our view. The relief in headline print disguises a continued pressure from underlying inflation: core inflation continues to run at an annualized pace around double-digits, and the share of items seeing a price rise in the month remains above 60%, indicating a widespread price pressure.”

Eight of the nine groups of goods and services tracked by the statistics agency saw price increases in early January. Food and beverages that became 0.97% more expensive as well as health and personal items that rose 0.93% led the gains, while transport costs fell 0.41%.

Contracts on interest-rate swaps due in January 2023, which indicate expectations about monetary policy at year-end, rose 12 basis points in morning trading as investors weighed odds that the central bank would further extend its cycle of aggressive interest-rate increases.

Prices have been pushed up by problems in global supply chains, extreme weather conditions and heightened demand for commodities like soy and iron ore. Annual inflation hit 10.74% in November, its fastest pace since 2003, which economists say was likely its peak.

But Wednesday’s print left some analysts pessimistic, as the data suggested that inflation remains widespread with little indication of easing soon.

“The inflationary outlook is very bad given that upward pressures will likely last at least until the next release and relief is unlikely to be consistent, given the current weather conditions,” said Etore Sanchez, chief economist at Ativa Investimentos in Rio de Janeiro.

Policy makers are still forging ahead with more interest-rate hikes to bring consumer price increases closer to their target of 3.5% for this year and 3.25% for 2023. Last month, the central bank took the Selic to 9.25%, and signaled a third-straight hike of 150 basis points was in store for early February.