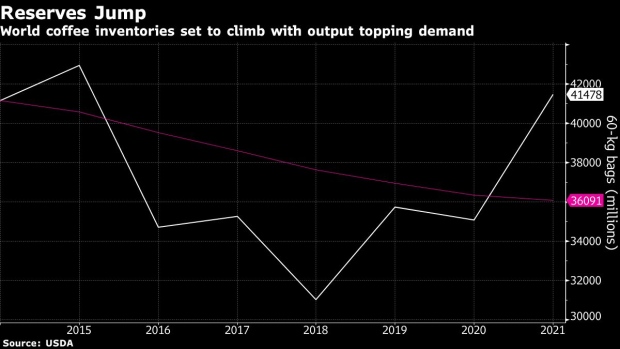 A worker harvests coffee on a farm in Alfenas, Minas Gerais state, Brazil in 2019. , Bloomberg

(Bloomberg) -- Brazil has an unprecedented coffee problem -- too many beans and nowhere to store them.

Warehouses in the world’s largest coffee exporter have never been so full, and trucks in Brazil’s coffee heartland are waiting days to unload cargo collected from a record crop during a time when global demand is waning.

The issue has come to a boil in Franca, about a five-hour drive north of Sao Paulo, where about 90 trucks brimming with coffee are stuck in line outside a warehouse operated by Dinamo.

“Just two days ago, it was 40 or 50 trucks,” Luiz Alberto Azevedo Levy Jr., a director at Dinamo, said in a phone interview. “We are very close to our maximum capacity.”

Trucks may have to wait around three days to unload, even with the warehouse running two hours extra each day and also on weekends. Similar lines are plaguing Dinamo’s unit in Machado and other warehouses in Mina Gerais and Sao Paulo states, Brazil’s top coffee producing states.

“I’ve never seen this situation before,” Levy said. “Producers have sold their crops and now they want to know where they will deliver. For exporters, it’s a more difficult situation. They bought the coffee and now they have to find space to store it.”

The warehousing crunch comes after farmers -- encouraged by higher prices in local currency -- sold most of this year’s harvest just as the pandemic shuttered restaurants, coffee shops and cafeterias across the globe, curbing consumption.

Demand for coffee remains weak, and speculation is that private warehouses are full even in the U.S., said Nick Gentile, managing partner for New York-based NickJen Capital Management. Global stockpiles will climb 18% in 2020-21 to a six-year high, according to the U.S. Department of Agriculture.

Major cooperatives in Minas Gerais’ south are storing beans in silo bags outside depots to meet demand, Alves said in an interview. Truckers are charging double to deliver beans due to long wait times, he said.

Farmer sales hit an all-time high this year, reaching 60% of a harvest that’s estimated at 68.1 million bags, according to consulting firm Safras & Mercado. Some 41 million bags have been delivered to buyers, with most heading to trading warehouses.

Coffee futures extended their biggest drop in a decade on ICE Futures U.S. after a favorable weather outlook in Brazil fueled a selloff by funds. Earlier this month, futures climbed almost 40% from the year’s low in late June.

Still, Brazilian coffee exports declined since the start of the season in July due logistical issues including limited availability of containers, said Carlos Alberto Fernandes Santana, a director at Empresa Interagricola SA, a unit of trader Ecom Agroindustrial Corp.

Minasul, a Minas Gerais-based farming cooperative that ships coffee directly to end-users, is among exporters having trouble booking container ships at Santos port, where most of Brazil’s coffee is shipped from. The group may export 20% less in September than it planned, according to the cooperative’s president, Jose Marcos Magalhaes.

“Delays are already surpassing 15 days and they are asking for one more week to take the coffee from our warehouses,” he said in an interview. “New contract sales are halted, unless the seller has warehousing availability to store beans for more than 10 to 12 days.”