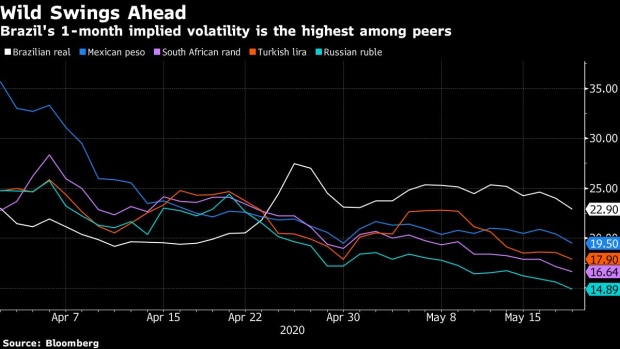 (Bloomberg) -- Brazil’s financial assets have fallen so far, so fast that you could think it’s time to buy. But the truth is few experts are ready call a bottom.

Latin America’s largest economy no longer seems like a bargain for investors, as a bungled response to the pandemic turned the country into the world’s fastest-growing virus hotspot.

Two health ministers have exited amid clashes with President Jair Bolsonaro, whose government has been engulfed in a political crisis that has pried open the door to a potential impeachment. That has left an ambitious reform agenda, which included an overhaul of the tax system, all but dead. With no reforms in sight and more spending to fight the virus, fiscal concerns resurfaced.

“There’s no clear catalyst” for a rebound, said Paulo Pereira Miguel, a partner at Julius Baer Family Office in Sao Paulo. “There’s skepticism about the country’s fiscal outlook after the crisis.”

The real has fallen almost 30% this year, outpacing any other currency in the world, and stocks lost almost half of their value in dollar terms amid the slew of local woes. The yield curve steepened to reflect the fiscal deterioration risk, while sovereign dollar bonds were more resilient, backed up by the nation’s $340 billion international reserves.

For the currency, the outlook is especially bearish as the central bank slashes interest rates to stimulate growth, which reduces its carry appeal. The real reached an unprecedented 5.97 per dollar earlier this month and Deutsche Bank AG says it could drop further to as much as 6.5 per dollar amid Brazil’s worst recession ever.

“Being bearish on the Brazilian real is a consensus view,” said Alvise Marino, a strategist at Credit Suisse AG in New York who expects the currency to reach 6.20 per dollar. “There’s no way around that.”

Stocks are also attracting negative bets. Sao Paulo-based Persevera Asset Management, which is run by former executives at HSBC Holdings Plc, is shorting Brazilian equities as it forecasts the Ibovespa index could drop 28% from current levels before rebounding.

“The economic legacy of this crisis will be more destructive than what the market is currently pricing in,” said Guilherme Abbud, a founding partner and chief investment officer at the firm. He says the gross domestic product may shrink by as much as 10% this year.

Many local funds have been favoring the U.S. stock market on a relative basis. Verde Asset Management, whose flagship fund is one of Brazil’s best-known hedge funds, said in a recent letter to clients that the country’s “mist of uncertainties“ have been hindering investment decisions.

Infighting among federal and state officials, not to mention within Bolsonaro’s own cabinet, have left the nation without a comprehensive strategy to slow the spread of the virus. Markets are also on edge because of allegations by former Justice Minister Sergio Moro that Bolsonaro tried to interfere in the federal police. While talk of impeachment is just that for now, analysts fret that new evidence may come to light.

“President Bolsonaro’s purge of government officials and the resignation of Sergio Moro, a top justice minister, elevated political risk to a level we are uncomfortable with,” Brendan McKenna, a currency strategist at Wells Fargo & Co. in New York, wrote in a note.

Despite all the uncertainties, some still see potential drivers for stocks. Goldman Sachs recommended investors buy the benchmark Ibovespa index, calling equities “an ideal bounceback candidate” as they benefit from growing appetite for risky assets and a rebond in commodities. Morgan Stanley strategists led by Guilherme Paiva said the historically low rates should continue to push more money into equities.

Concern is mounting, meantime, that stricter lockdowns may hurt an economy that’s already expected to contract 5.1% this year. While the U.S. and European nations take their first tentative steps to reopen, Schroders Plc says Brazil may be the last economy in the world to do so.

“The Brazilian economy has been hit hard by the Covid-19 crisis,” said Katrina Butt, a senior Latin America Economist at AllianceBernstein in New York. “The uncertainty of economic reopening globally is likely to increase demand for dollars against most currencies, especially emerging-market ones, in the near term.”