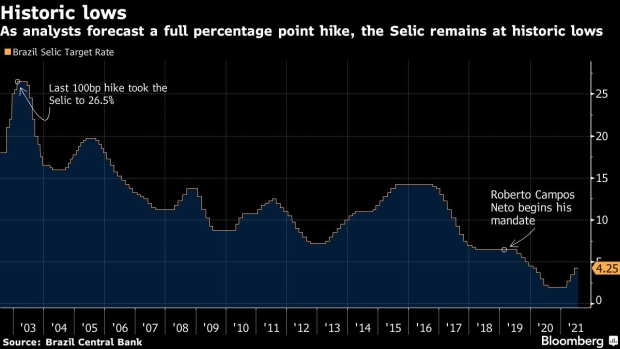 (Bloomberg) -- Brazil’s central bank will likely turn even more hawkish by delivering its biggest interest rate hike since 2003, as policy makers contend with an array of price pressures that’s seen keeping inflation above target through 2022.

The bank will lift the benchmark Selic by a full percentage point to 5.25% on Wednesday, as forecast by all but two of the 40 economists surveyed by Bloomberg. The others expect a fourth increase of 75 basis points. With no inflation relief in sight, analysts are divided over whether the board will signal aggressive monetary tightening ahead or scrap all guidance for the year’s final meetings.

Policy makers led by Roberto Campos Neto are battling inflation that has surged to a five-year high as commodity costs make food more expensive, while drought pressures electricity bills. They are also sounding the alarm over prices in the services sector, which has nearly rebounded to pre-pandemic levels as vaccinations pick up and the economy reopens.

The odds appear biased for the central bank to raise the Selic by 100 basis points. The recent acceleration in services inflation weighs against the case of a milder rate hike. At 5.25%, the policy rate would still be below its neutral level -- estimated to be 3% in real terms or 6%-7% in nominal terms. We expect rate hikes in coming meetings to bring the Selic to 6.5% before year-end, ending a four-year-long cycle of monetary stimulus.

Wednesday’s decision will be published on the central bank’s website after 6:30 p.m. local time in Brasilia, together with a statement from the bank’s board. These are the most important points investors will be focusing on:

As inflation becomes more widespread, many analysts will be looking to see if the central bank delivers a more aggressive tone on future rate decisions. That could mean emphasizing they would do whatever it takes to bring consumer prices back to target.

At their last policy decision, board members indicated interest rates could reach neutral levels, which neither stimulate nor constrain the economy. Analysts will be scanning the statement for signs that they could go even higher, especially now that services prices have been accelerating.

Cassiana Fernandez, and economist at JPMorgan Chase & Co, said the central bank will most likely alter its assessment. “They will need to change their language and say rates need to be above neutral to contain inflation,” she added.

Brazil’s inflation outlook has worsened since the last rate-setting meeting, and financial markets will look to see how the central bank describes the trend. Economists in a central bank survey forecast cost of living increases at 3.81% at the end of next year, above the 2022 target of 3.5%. What’s concerning is not only the overall speed of price increases, but also their composition.

“Pressure is not receding, and core metrics are going up, services too,” said Andre Loes, chief economist for Latin America at Morgan Stanley. “The best option would be to hike more now.”

He expects a full percentage point increase on Wednesday, and a slow-down in the pace of the subsequent hikes that would take the Selic to 6.5% by year-end.

Investors will examine central bank language regarding an economic growth outlook that’s facing a raft of new challenges. Views on fiscal pressures, the delta coronavirus variant and the impact from unfavorable climate will be key to asses what’s to come. As policy makers move toward more restrictive rates, the recovery will likely slow down. The bank board currently forecasts 4.6% growth in 2021, below the financial market consensus of 5.3%.