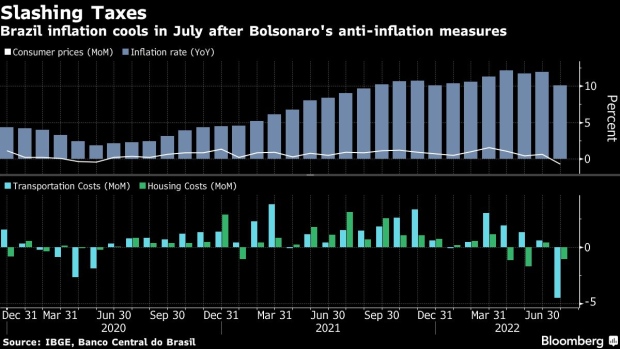 (Bloomberg) -- Brazil consumer prices tumbled by the most on record in July after President Jair Bolsonaro slashed utility taxes to tame the soaring cost of living and lift his re-election chances.

Official data published Tuesday showed consumer prices fell 0.68% compared to June, more than the -0.65% median estimate from analysts in Bloomberg survey. It was the biggest monthly drop since the start of the data series in 1980. Annual inflation eased to 10.07%.

Still, earlier in the day, the central bank said it would consider a new rate hike of 25 basis points in September, and that borrowing costs will remain high for a “sufficiently extended period” amid inflation risks from public spending. Recent fiscal measures may make it difficult to assess the outlook, board members wrote in the minutes to their Aug. 2-3 policy meeting.

The central bank has lifted the key rate 11.75 percentage points since March 2021 in response to a series of food and fuel shocks. With general elections now less than two months away, Bolsonaro has thrown the full weight of his office into easing economic hardship and making up ground against his leftist rival, Luiz Inacio Lula da Silva. Polls show Brazilians widely blaming the president for their pocket-book pain, and Lula coasting to victory.

“The upcoming presidential election may weigh on the currency and challenge the central bank’s plan to hold the rate. We see downside risks for our end-2022 forecast of a 14% policy rate, and rising upside risks to our end-2023 expectation of 10.5%.”

Turbo-charged by a multi-billion dollar aid package recently approved by congress, Latin America’s largest economy is showing signs of resilience. A strong labor market combined with new spending is boosting demand and complicating the central bank’s outlook as it nears the end to tightening.

In the run-up to the October vote, efforts to tame rising costs are beginning to bear fruit, with annual inflation cooling from 11.89% in June. Prices still remain well above targets of 3.5% and 3.25% for this year and next, respectively.

Key among Bolsonaro’s anti-inflation measures were caps imposed on gasoline and electricity taxes, which helped pull prices down significantly in July.

Transportation costs sank 4.51% as gasoline plunged by 15.48%, and housing fell 1.05%, with those declines driving the monthly drop.

“We were surprised by a higher-than-expected gasoline deflation resulting in a faster and more intense transfer than estimated,” said Tatiana Nogueira, an economist at XP Inc.

Still, the other seven groups of goods and services surveyed by the statistics agency became more expensive, indicating how widespread inflationary pressures remain. Food and beverage costs increased by 1.3%, with milk alone surging by 25.46%.

It remains unclear how much the aid will boost Bolsonaro’s standing among voters. Economists warn it risks stoking prices in the long term, but many say the worst of inflation may now be over for Brazil.

“As for the quality of inflation, we have seen first signs of an improvement in general measures,” Daniel Karp, an economist at Banco Santander in Brazil, wrote in a research note. “But services inflation is still a source of concern for the medium term, specially with the job market still running hot.”