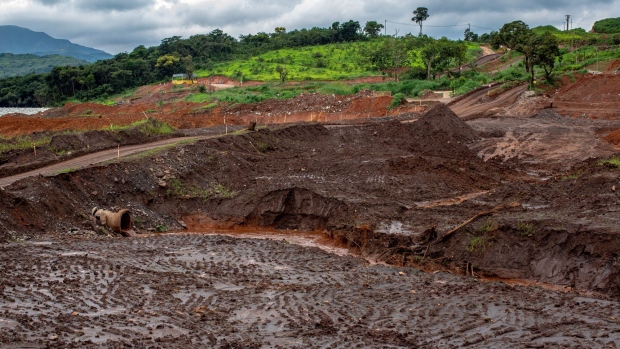 Mud from the Vale SA dam break is seen in a valley in Brumadinho, Minas Gerais state, Brazil, on Tuesday, Jan. 21, 2020. Nearly one year ago, a Brazilian dam operated by iron ore miner Vale gave way to a tsunami of mining sludge that buried part of a town and killed 270 people. CEO Fabio Schvartsman has stepped down, and prosecutors have charged him along with 10 others with homicide. Photographer: Victor Moriyama/Bloomberg , Bloomberg

(Bloomberg) -- A final settlement between Brazilian authorities and the Samarco iron-ore venture can be reached this year, bringing legal certainty to owners Vale SA and BHP Group six years after a devastating tailings dam collapse.

That’s according to federal prosecutor Carlos Bruno Ferreira da Silva, who said in an interview that the final reparation value is yet to be defined and will be based on independent technical studies.

Silva, who is leading talks on behalf of prosecutors, pointed to a document signed by the parties that estimates talks to last about four months from June 22, the last four weeks of which would be focused on a final draft. Authorities and company officials have been meeting weekly.

A settlement would replace a giant lawsuit, removing a considerable legal overhang for Samarco and its shareholders after the 2015 collapse spewed millions of tons of sludge into communities and waterways, killing 19 people. That public-civil suit is suspended during the talks.

Still, there’s a lot at stake in the final phase of negotiations. In 2016, prosecutors issued a preliminary reparation calculation of 155 billion reais ($30 billion). Earlier this week, Reuters quoted Minas Gerais Governor Romeu Zema as saying it could reach 100 billion reais over five years. Vale’s recent 37.7 billion-real settlement for a seperate dam disaster at Brumadinho offers another point of reference -- it came in at two-thirds of what was initially sought by courts.

Private consulting firms are carrying out the socio-environmental diagnosis to measure the damage and what the companies have already done.

“This value can be higher or lower, depending on what the studies show,” said Silva.

For now, Silva says authorities have come up with detailed proposals to address individual indemnities. The Brazilian National Council of Justice mediating the negotiation is expected to convene public hearings in August and September to hear from the impacted population.