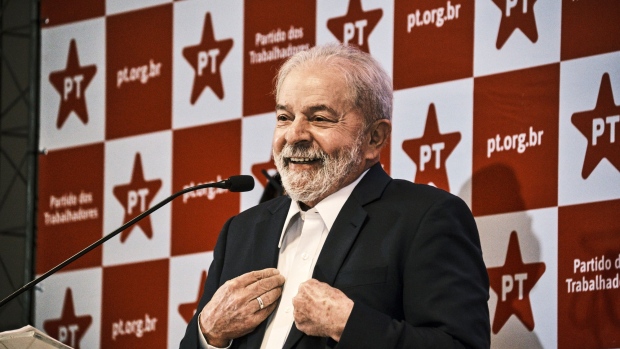 Luiz Inacio Lula da Silva, Brazil's former president, speaks during a news conference in Brasilia, Brazil, on Friday, Oct. 8, 2021. Lula said that he is not yet discussing political composition for the 2022 elections and that he has not yet decided on names to become vice president or Economy Minister. , Bloomberg

(Bloomberg) -- The Brazilian real gained after leftist ex-President Luiz Inacio Lula da Silva, the front-runner in this year’s presidential race, said he would like to have former Sao Paulo Governor Geraldo Alckmin as his running mate.

“We have divergences, and different visions of the world, but I will not have any problem in making a ticket with Alckmin to win the elections and govern this country,” Lula told local websites on Wednesday, adding that he will seek the support of centrist and even center-right parties. It’s the first time he has gone so far as to publicly ponder a partnership with the right in his candidacy.

The real strengthened 1.6% to 5.479 per U.S. dollar, leading gains among emerging market currencies, as investors considered a possible alliance with Alckmin as a sign that Lula would veer toward more moderate policies if elected.

“It reduces the likelihood that Lula’s program will be radical,” said Juan Prada, a currency strategist at Barclays Capital. “If he is looking for alliances with centrists, not-market-unfriendly people, that is positive.”

Investors are increasingly turning their attention to Brazil’s October election, which could mark Lula’s comeback, after last year’s Latin American races swept other leftist leaders to power in Chile and Peru. Alliances with more moderate parties would likely bring Lula’s potential government toward the political center.

Lula and Alckmin actually faced off against each other in the presidential race of 2006: the leftist won and Alckmin took second place. The ex-governor left the centrist Brazilian Social Democracy Party last year amid talks to join a ticket led by his former opponent. During such negotiations, he showed apprehension when learning of Lula’s interest in reversing a recently-approved labor reform, only to be told by aides to the ex-president that no decision would be taken without allies being consulted.

In his comments on Wednesday, Lula also said that the central bank needs to work for Brazil, not the president, adding that he intends to reach out to the bank to discuss the country’s outlook.

A Jan. 12 poll showed 44% of Brazilians would back Lula in a head-to-head match-up against President Jair Bolsonaro, as the pandemic and an economic recession have dragged down the incumbent’s popularity.