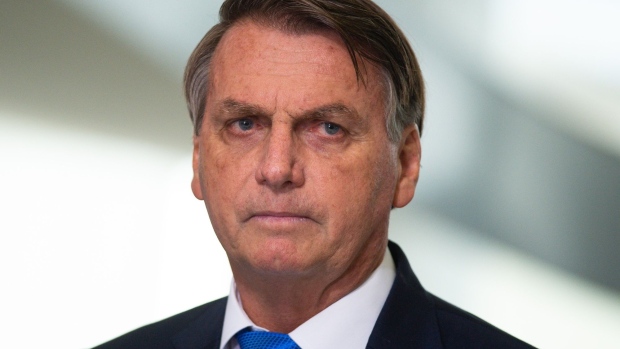 Jair Bolsonaro, Brazil's president, pauses while speaking during a news conference at the Planalto Palace in Brasilia, Brazil, on Wednesday, March 31, 2021. Commanders of Brazil's army, navy and air force were fired on Tuesday after Bolsonaro dismissed his defense chief as part of a broader cabinet restructuring. , Bloomberg

(Bloomberg) -- Brazil President Jair Bolsonaro, under pressure from lawmakers who are investigating his government’s handling of the pandemic, is preparing changes to some cabinet positions to accommodate a representative from the senate.

Senator Ciro Nogueira, a leader of the powerful group of centrist parties in congress, will likely assume as Bolsonaro’s chief of staff, replacing General Luiz Eduardo Ramos, who’s bound to become his secretary general, according to two people familiar with the matter.

Bolsonaro, who is currently not a member of any political party and needs alliances to pass bills in congress, confirmed he intends to make cabinet changes, without citing names.

“We’re working on a small cabinet change, likely to take place on Monday, so that we can continue governing Brazil,” he said in an interview broadcast on social media on Wednesday. “I knew the work wouldn’t be easy, but it’s really very hard. I don’t recommend this post to my friends.”

Bolsonaro’s popularity has dropped to all-time lows as he faces a long-running senate probe that has found evidence of corruption in the purchase of jabs against Covid-19. The president himself is facing a criminal investigation authorized by the nation’s top court on whether he failed to stop irregularities in vaccine contracts when allegedly warned about them.

While Bolsonaro finds a more amenable lower house under the leadership of Speaker Arthur Lira, senators have been more critical of his government, extending the work of the committee that investigates the response to the pandemic. Bolsonaro also needs the senate to approve his appointment of Andre Mendonca, an evangelical pastor, to join the Supreme Court.

Onyx Lorenzoni, Bolsonaro’s longtime ally and currently his secretary general, is pushing to become labor minister, a position that the president included under the mandate of the economy ministry when he took office. Lorenzoni met with Economy Minister Paulo Guedes on Wednesday morning.