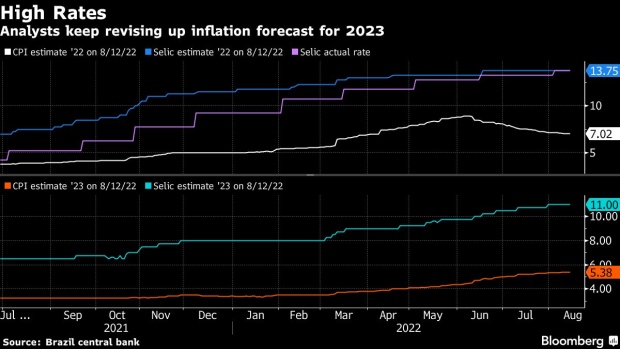 Shoppers at the Uruguaiana Municipal Market in downtown Rio de Janeiro, Brazil, on Tuesday, April 5, 2022. Although Brazil's central bank is months into an aggressive tightening campaign, the country's inflation rate was still 11.3% in March. , Bloomberg

(Bloomberg) -- Brazil’s economic activity expanded more than expected in June, showing resilience to an aggressive monetary tightening campaign that has so far been unable to contain inflation expectations.

The central bank’s economic activity index, a proxy for gross domestic product, rose 0.69% from May, more than the 0.35% median estimate in a Bloomberg survey. From a year ago, activity increased 3.09%, the bank reported on Monday.

Swap rates on the contracts due on January 2023, which indicate investor expectations for the benchmark interest rate at end-2022, rose 1.5 basis points in morning trading.

Brazil’s economy has shown signs of dynamism, with the labor market performing better than expected, even after the central bank increased its key interest rates by 11.75 percentage points since March 2021, to 13.75%. Recently-implemented measures to ease the pain of inflation are expected to further support domestic demand.

Ahead of October’s presidential election, President Jair Bolsonaro got the green light for a multibillion social program that raised monthly cash handouts to the poor by 200 reais until the end of the year. He has promised to maintain that extra payment if re-elected, and so has his main challenger, former President Luiz Inacio Lula da Silva.

“There’s a well-known saying: nothing is more permanent than a temporary government program,” he said at an event organized by Millenium Institute, a local think tank, after the data was released. “That certainly worries us.”

Yet he added that inflation is showing signs of improvement, especially in the services sector, even as he forecast that unemployment could soon hit a seven-year low of 8.5%.

“The labor market has been one of the biggest surprises,” he said. “We never imagined unemployment could be below 9%.”

“The expansion in Brazilian activity in June defied high rates, tight financial conditions and diminished purchasing power from high inflation. A fiscal impulse may extend the momentum into the third quarter.”

The outlook for additional social spending is keeping inflation expectations above target through 2024. Economists surveyed by the central bank increased their estimates for 2023 for the 19th consecutive week, to 5.38%. They see prices rising 3.41% in 2024.

Central bankers said they will now give more emphasis to inflation estimates for early 2024 as their current horizon was “heavily impacted” by recent tax cuts on gasoline prices. They also pointed to upside risks to their price outlook if fiscal stimulus becomes permanent. Inflation is seen at ending 2022 at 7.02%.

“We are always looking at the calendar year, but our relevant time horizon has been adjusted to improve” the way we react to the data, Campos Neto said.

Though central bankers said they would mull a smaller boost in September, most analysts believe the tightening campaign is over. The key Selic rate is expected to stay at 13.75% this year and drop to 11% by December of next year.