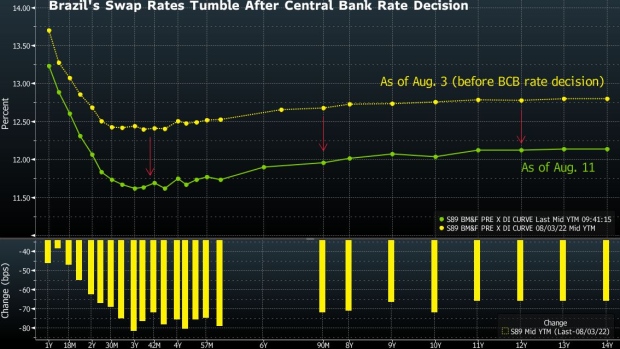 Workers protest outside of the Central Bank of Brazil in Brasilia, Brazil, on Wednesday, May 4, 2022. Inflation is so rampant in Brazil, having surpassed 12% a year in early April, that workers at the institution in charge of taming prices are themselves on strike, demanding wage raises to recover lost purchasing power. , Bloomberg

(Bloomberg) -- After profiting from one of the world’s most aggressive monetary tightening cycles, some Brazilian money managers are switching tack and starting to bet on the opposite trade.

“We’re flirting with receiving positions in emerging economies,” said Rodrigo Azevedo, founding partner at Ibiuna who was the director of monetary policy at the nation’s central bank between 2004 and 2007. Inflation in Brazil has started to turn, but the question is how fast this move will be, Azevedo said at an event earlier this month.

The shift comes as policy makers signaled last week the 17-month tightening cycle that took the country’s benchmark interest rate to 13.75% from 2% is nearing an end as inflation peaks. The dismantling of bets on higher rates has prompted a slump in local swap rates, with contracts due January 2025 falling 66 basis points over the past week. The bet on falling rates got an extra boost after US inflation slowed more than forecast on Wednesday, triggering a rally in emerging-market assets.

While rates and inflation may have peaked, fiscal uncertainties remain high and investors are bracing for October presidential elections. Former President Luiz Inacio Lula da Silva, who leads polls, signaled he’ll boost public expenditure if he returns to power, while incumbent Jair Bolsonaro has recently embarked on a spending spree to help offset the impact of inflation and boost his popularity.

Brazilian hedge funds gained from wagers in rising local rates last year and gradually shifted their bets to developed nations -- including the US. That has helped send returns jumping, with the Anbima Hedge Funds Index climbing 8.3% in the first six months of the year -- the strongest first-half since 2016.

Here’s what some of the main Brazil hedge funds said in their July monthly letters:

Fund resumed bets on higher US rates and marginally boosted its short position in US stocks. Locally, it scrapped bets on higher rates. Brazil’s economic activity should prove resilient amid the government’s fiscal package.

Uncertainties remain elevated despite a favorable environment for risk assets. Odds of a normalization in global asset prices amid the economic slowdown are now higher.

Brazilian assets got a boost from the global risk-on mood and the rebound in commodities last month. Fund is betting on higher rates in Canada.

Fund closed positions that stood to gain from rising Brazilian rates, scrapped a bearish bet on the real and currently has a net long position in local stocks.

Fund trimmed bets on higher rates in G10 economies, while having a low exposure to FX markets.

Fund expects Brazil’s gross domestic product to grow 2.3% this year. Current environment favors bets on the steepening of rate curves, short positions in equity markets and bearish bets on the US dollar and the euro against other currencies.

Fund scrapped its bullish bet on Chinese stocks, and still has short positions in US, Europe and Brazil stocks.

A scenario where Bolsonaro narrows his gap with Lula “is quite likely” over the next month. Verde fund trimmed its position in global equities following the sharp rally in US stocks last month, while maintaining its exposure to Brazilian names. Fund closed a long position in the Brazilian real that had been opened using options.