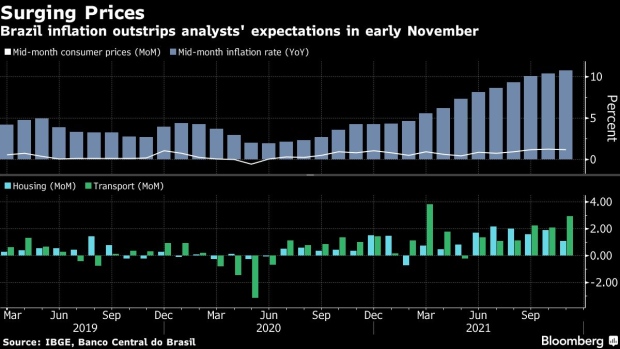 Annual inflation accelerated to 10.73%, above the 10.69% median estimate in a Bloomberg survey. Consumer prices rose 1.17% from the month prior, the national statistics agency reported on Thursday.

All nine categories surveyed by the statistics agency saw price increases on the month. Transportation and housing costs, which rose 2.89% and 1.06% respectively, were the main drivers, leading to the biggest mid-month price rise for November in nearly two decades, the agency said.

In recent weeks, policy makers have signaled another 150-basis point rate hike is on the way in December, though Campos Neto stopped short of repeating that guidance at an event on Wednesday.

On Thursday, some investors had braced for a much bigger upside surprise on inflation.

“The inflation number came in just above forecasts, and it shouldn’t change bets for an increase of 150 basis points at the next meeting,” said Carlos Menezes, a portfolio manager at Gauss Capital Gestora de Rec Ltda. “Yesterday, Campos Neto was dovish, and that view became stronger today because the inflation number wasn’t as high.”

Higher borrowing costs are now dragging on Brazil’s rebound from the pandemic. This week economists surveyed by the central bank slashed their 2022 growth estimates to 0.70% from 0.93%. It was the seventh straight cut.