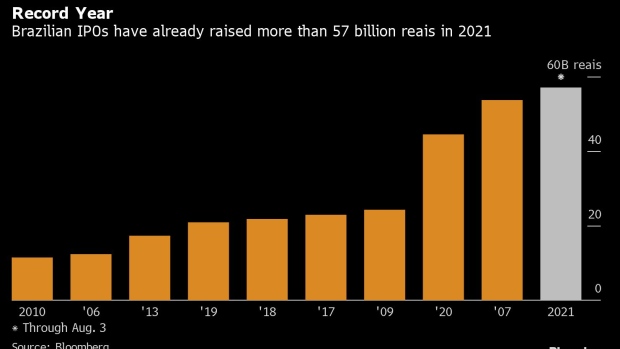 (Bloomberg) -- With less than half of 2021 left to go, Brazil’s IPO market has already clocked a record year.

The combination of historically low interest rates in Brazil, an economic rebound for Latin America’s top economy from the Covid hit and a booming local money management industry has paved the way for a sharp increase in initial public offerings.

Forty-two listings from Brazilian companies have raised more than 57 billion reais ($11 billion) so far in 2021, according to data compiled by Bloomberg. That tally beats the previous full-year record of 53.6 billion reais in 2007, when 60 firms went public.

The latest offering from Raizen SA, a joint venture between Royal Dutch Shell Plc and Brazil’s conglomerate Cosan SA on Tuesday pushed the year into the record books. It priced shares at 7.40 reais each, the bottom of the indicative range. The stock will start trading on Thursday.

Historically low rates have led to “significant portfolio rebalance toward growing exposure into equities in lieu of other asset classes,” said Ricardo Bellissi, co-head of Brazil investment banking at Goldman Sachs Group Inc. “Prospects of resuming economic activity coming out of the significant Covid-led contraction have also been an important driver.”

The number of Brazilian IPOs is up more than 400% this year through Aug. 4 from the same period in 2020, compared to an increase of about 110% for companies based in the U.S., Bloomberg data show. The numbers exclude blank-check vehicles.

The growth of the asset-management industry is also contributing to the surge in share sales, with Brazilian funds taking a larger role in the IPO market, according to Cristiano Guimaraes, executive director for global corporate and investment banking for Banco Itau BBA. Itau is the top underwriter for Brazilian IPOs this year, according to data compiled by Bloomberg.

“It was impossible to sell an IPO in Brazil without the presence of foreigners” back in 2007, Guimaraes said.

Brazil’s equity funds had around 700 billion reais under management in June, compared to 170 billion reais at the end of 2007, according to Anbima, the local capital markets association. Hedge funds, which can also invest in stocks, went from 276 billion reais to about 1.6 trillion reais during the same period, benefiting from record inflows.

Despite the tailwinds, not every deal has been a winner. Services marketplace GetNinjas and aluminum company Companhia Brasileira de Aluminio have been among the companies that had to price their IPOs below the marketed range while others have pulled offerings, including InterCement’s Brazil unit in July.

The upcoming political and economic backdrop will test the appetite for Brazil’s market newcomers. The central bank meets on Wednesday and is expected to deliver its biggest rate hike since 2003 amid rising inflation, while the electoral calendar should also bring more volatility to markets as the 2022 presidential race nears, according to Goldman’s Bellissi.

In the meantime, more than 20 Brazilian firms are lined up to go public, with Oncoclinicas, a medical-care provider owned by Goldman, scheduled to price its IPO on Friday. Digital lender Nubank, which counts Warren Buffett’s Berkshire Hathaway as one of its holders, has voiced plans to list shares.

There’s a “significant pool of capital” to be deployed and a wide range of companies emerging from the pandemic with growth-driven strategies, said Bellissi.

“We do expect this strong pace to continue,” Bellissi said.