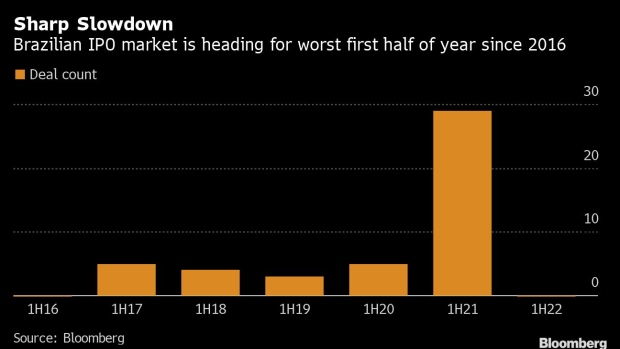 Pedestrians walk past Brasil Bolsa Balcao (B3) stock exchange in Sao Paulo, Brazil, on Friday, March 25, 2022. The Brazilian real extended its world-beating rally and reached the strongest level since March 2020 as the country's assets have been attracting emerging-market investors despite heightened global volatility due to its exposure to commodities, high interest rates and some fiscal room despite increased spending ahead of the presidential election. , Bloomberg

(Bloomberg) -- The market for initial public offerings in Brazil has been moribund through the first half of the year, with zero IPOs getting priced after posting record volumes in 2021.

There were 29 Brazilian deals last year through June 23, 2021, which raised about $6.9 billion, according to data compiled by Bloomberg. The percentage drop is even more drastic than the dreary US IPO market, where the deal count fell to 104 from 484 over the same period.

The South American nation is heading for its first half-year without any deals since 2016 -- when then-President Dilma Rousseff was facing an impeachment trial and the country grappled with a record recession. This time, surging rates are curbing the appetite for risk, while fears of a global economic deceleration mount and investors turn cautious ahead of Brazil’s October elections.

“Sustained volatility continues to permeate global investor sentiment,” said Bruno Saraiva, co-head of investment banking for Brazil at Bank of America Corp. “Investors are more selective, and the best-case scenario would be to see a reduced number of IPOs come to market by the end of the year.”

Of course, Brazil isn’t alone in its slowdown. The global market for IPOs has collapsed this year as waves of volatility and lower equity valuations push investors away from risk. The dropoff in new listings is fueling the weakest first half since 2005 in equity capital markets, according to data compiled by Bloomberg.

The S&P 500 Index tumbled into a bear market last week on mounting expectations that the Federal Reserve will need to be more aggressive to fight inflation, even if it risks sending the US economy into recession.

The poor performance of Brazilian companies that went public last year hasn’t helped spur demand. Share prices of 2021 IPOs were down by a size-weighted-average of 38% through the close on June 22, Bloomberg data show. Companies like Mobly SA, Brisanet Participacoes SA and GetNinjas SA are trading more than 80% below their offer price.

That said, the market for secondary offerings in Brazil has been livelier. Earlier this month, state-owned power company Eletrobras’s transaction raised $6.9 billion in a privatization that became the world’s second-largest equity deal this year.

Still, bankers said that any recovery in Brazil’s IPO activity is likely to be gradual.

“The question is why a company should rush to go public right now -- when uncertainty is sill high and relative references of value are still distorted,” said Ricardo Bellissi, co-head of Brazil investment banking at Goldman Sachs Group Inc. “We may head for a more normalized scenario following the elections, but the global backdrop shows a high degree of complexity.”

Water utility BRK Ambiental, which is owned by Brookfield Asset Management Inc., and Corsan, a sanitation company controlled by Rio Grande do Sul state, have both filed for public offerings, but they may want more market stability before pushing ahead.

While some Brazilian firms may choose to delay their listings, there’s still appetite for specific publicly-traded names, especially with Brazilian valuations near the lowest since 2008.

General Atlantic LLC has scooped up shares in web services provider Locaweb Servicos de Internet SA through a block trade and now owns a 11% stake in the company, regulatory filings show. And the secondary offering that privatized Latin America’s top utility Eletrobras this month was the second-largest share sale in the world so far this year.