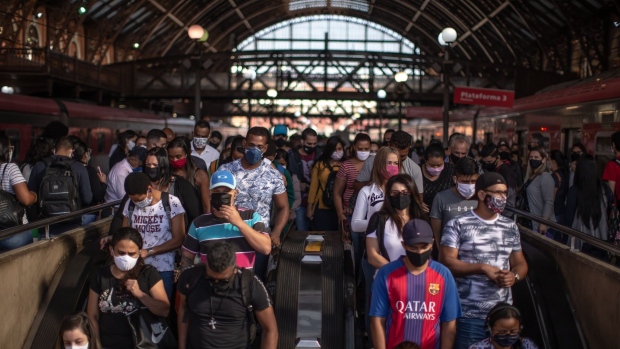 Commuters wearing protective masks walk onto excalators inside the Luz train station in Sao Paulo, Brazil, on Monday, June 22, 2020. Latin America's most populous country is only the second nation to reach the grim milestone of 1 million cases and, like in the U.S., the surge can be traced to reopenings and social distancing measures being lifted. , Bloomberg

(Bloomberg) -- Brazil lost way less jobs than expected in May as Latin America’s largest economy started to reopen despite no sign of letdown in the coronavirus crisis.

Employers eliminated 331,901 formal jobs last month, less then half the 860,503 positions lost in April, according to economy ministry data. Economists surveyed by Bloomberg expected 900,000 job losses in the month.

The Brazilian real gained on the data, trading 1.5% stronger at the end of the day.

The results reflect improvements in the services and civil construction sectors which started to benefit from the reopening of the economy, according to Social Security Secretary Bruno Bianco. In addition, the agriculture sector created 15.993 positions in May, the only with net hirings.

“The result shows the economy is rebounding,” Bianco told reporters after the report was released. He declined to give a forecast for the job market at the end of the year, however.

Several Brazilian states and municipalities have allowed shops to reopen and construction to resume as part of controlled push to revive an economy expected to contract about 6.5% this year. The strategy is risky as the pandemic is far from controlled in Brazil, with the number of Covid-19 cases and deaths still rising.

“There is also the possibility that the government’s program allowing companies to reduce paychecks while keeping jobs is working,” said Adriana Dupita, senior economist with Bloomberg Economics.

The program to protect jobs will be extended for two more months, Bianco said. He added that the government will announce a plan to stimulate new hirings shortly. In the year through May, Brazil has lost 1.14 million formal jobs.