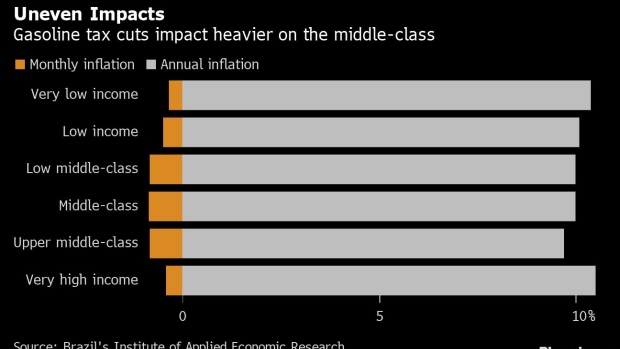 (Bloomberg) -- Brazil’s middle class is benefiting the most from gasoline tax cuts pushed by President Jair Bolsonaro, while costlier food staples add to the pain of the poor and more expensive airfare weigh on the budget of the wealthy.

Consumer prices plunged 0.83% for the middle classes in July, more than the 0.68% monthly fall recorded by Brazil’s benchmark IPCA index, according to data published Friday by the National Institute of Applied Economic Research. In comparison, the poorest experienced a more modest 0.34% drop in prices and the richest, a 0.42% decline.

July’s negative inflation readings followed a series of fuel tax cuts pushed by Bolsonaro, who’s trying to ease the impact of the rising cost of living that’s a key voter complaint ahead of October’s election. Annual inflation, however, remains above 10% and the relief may be just temporary as taxes are likely to rise again next year. As part of the aid package, Bolsonaro also got the green light from congress to boost cash handouts for the poor to 600 reais ($117.54) from 400 reais, which is likely to support demand despite the central bank’s aggressive monetary tightening campaign.

Hurting the poor the most are steep rises in key food staples that consume an average 29% of their budget -- including milk that became 25% more expensive over the past year, as well as eggs and bread that jumped 19% and 17% in price, respectively. The richest, on the other hand, spend only 13% of their budget on food.

Meanwhile, transportation costs take up 28% of the income of the higher classes but 14% of the poorest.