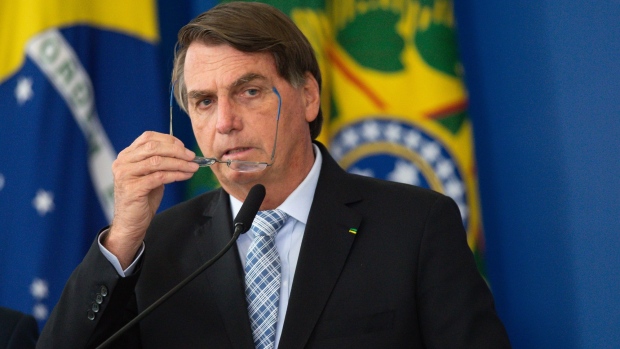 Jair Bolsonaro, Brazil’s president, speaks during a bill signing ceremony at the Planalto Palace in Brasilia, Brazil, on Wednesday, March 10, 2021. Bolsonaro said Brazil will have more than 400m doses of vaccines available by the end of this year. , Bloomberg

The government on Tuesday decided to upgrade its main social welfare program to give 400 reais ($72) per month to its poorer population as part of the Auxilio Brasil assistance, Bolsonaro said in a speech in Russas, in the northeastern state of Ceara. The president said the new spending, to benefit about 17 million Brazilians, would have to be contained in the country’s budget.

“We have a fiscal cap law that we respect,” Bolsonaro said, without providing details on how extra spending can be accommodated within the rule. “We have the responsibility to make these resources come from the federal budget, nobody will breach the cap.”

Read More: In Brazil, Anemic Growth Expected for the Rest of 2021

Brazilian assets tumbled the most in the world on Tuesday on reports the government will breach the country’s spending cap rule, in place since 2017, to finance the new social program. The cap rule is seen by economists and investors as one of the key pillars of Brazil’s fiscal policy, keeping government finances from derailing by limiting spending growth to the inflation rate of the previous year.