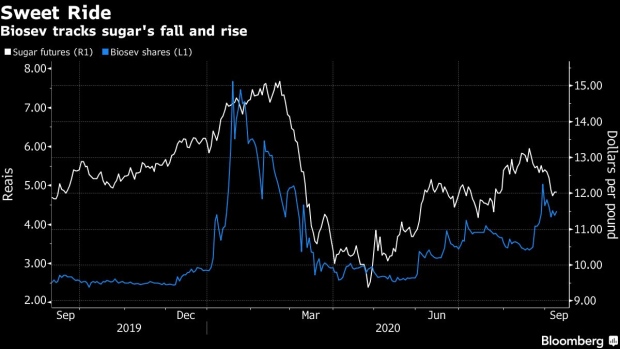 (Bloomberg) -- Brazil’s biggest sugar producer Raizen Energia SA is in talks to acquire a local unit of Louis Dreyfus Holding BV, according to people familiar with the matter.

The deal would see Louis Dreyfus swap its Biosev SA subsidiary in return for a minority stake in Raizen, a joint venture between Royal Dutch Shell Plc and Cosan SA, the people said, asking not to be identified because talks are private and may not lead to an agreement. Raizen, Biosev and Louis Dreyfus declined to comment on the discussions.

Also on the table is a debt restructuring that would see a possible extension to payments on Biosev’s 7.3 billion reais ($1.4 billion) in debt in exchange for Dreyfus paying part of it upfront, the people said.

The deal would be Raizen’s biggest and help resolve Biosev’s years-long battle with debt, which has in the past forced Dreyfus to inject about $1 billion into the unit. Dreyfus is trying to raise cash as its owner seeks funds to pay down loans and is in talks to sell a minority stake to Abu Dhabi sovereign wealth fund ADQ.

Biosev’s woes began with a period of sugar surpluses and gasoline price caps that reduced demand for ethanol made from cane. Global sugar prices are down about 50% from a 2016 peak.

In the year ended March, Biosev had a record net loss of 1.55 billion reais, its ninth straight negative result. The company’s debt was up 22% from a year ago amid Brazilian currency devaluation, triggering covenant breaches.

“Biosev does not comment on rumors and reaffirms that it remains focused on operational competitiveness, aiming at increasing its cash generation, strengthening its capital structure and fulfilling the commitments assumed with all stakeholders,” the company said.