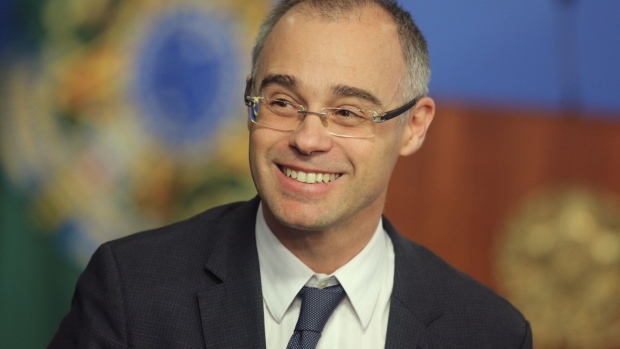 Andre Luiz de Almeida Mendonca, Brazil's attorney general, listens during a swearing-in ceremony for Gustavo Montezano, chief executive officer for the Brazilian Development Bank (BNDES), not pictured, at the Planalto Palace in Brasilia, Brazil, on Tuesday, July 16, 2019. Montezano said one of his goals is to speed up the sale of stakes bank owns in companies; sees sale of up to 100 billion reais this year. , Bloomberg

(Bloomberg) -- Brazil’s senate approved an evangelical pastor nominated by President Jair Bolsonaro to fill in a vacant position in the country’s top court, bringing a more conservative voice into the 11-member institution.

Andre Mendonca, who previously served as attorney general and justice minister under Bolsonaro, was approved by 47-32 votes on the floor of the senate on Wednesday, after a seven-hour hearing conducted by members of the Constitution and Justice Committee.

With his confirmation, Bolsonaro fulfills a promise to have a “terribly evangelical” justice in the court -- a nod to conservative religious Brazilians who make up about a third of the population and a large portion of his electoral base.

During his hearing, Mendonca sought to dispel senators’ concerns about the impact of his religious views on sensitive court rulings, promising to uphold the country’s secularism with the mantra: “In life, the Bible; in the Supreme Court, the Constitution.” He added though that Brazil is in a “process of conversion” and that evangelicals will likely become the majority of the population within the next decade.

Mendonca is Bolsonaro’s second pick for the top court after Justice Kassio Nunes Marques, whom he nominated in October of last year in a gesture meant to appease the powerful centrists in congress. Brazil’s next president will be able to nominate two more justices to replace Ricardo Lewandowski and Rosa Weber, who retire in 2023.