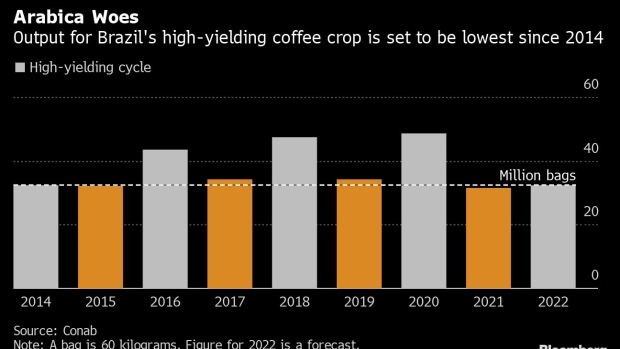 While September rains helped trees blossom for the start of the new harvest season, farmers are concerned by what they’ve seen so far. Some trees are losing their leaves, while others produced unusually shaped flowers. Fruits are falling to the ground before they get a chance to grow.

“Coffee trees have a good memory,” said Éder Ribeiro dos Santos, an agronomist at Brazil’s biggest coffee cooperative Cooxupe. “They are resentful of all the bad they experienced over the past two seasons.”

The world’s largest producer just concluded a dismal harvest, which is expected to send coffee bean stockpiles to a record low. This is bad news for consumers who depend on the morning elixir. Tight supplies worldwide are keeping coffee futures elevated, contributing to food inflation. Adverse weather conditions globally are also pressuring total stockpiles with La Nina threatening production in Colombia, the world’s second-ranked coffee supplier.

At one farm, the budding trees showed so many signs of damage that experts are unwilling to forecast what its output will be this season. “Agronomists don’t even want to give me an estimate for my production, because there is just so much we don’t know,” said Sergio Castejon, who has a farm in Monte Santo de Minas, in the state of Minas Gerais.

Lingering effects from the drought and frost are to be expected during the 2023 season because coffee trees need time to recover, said Cláudio Pagotto Ronchi, a professor at University of Viçosa that specializes in plant physiology.

Regular rains are expected for the following months, removing at least this concern from producers’ minds, Rural Clima meteorologist Marco Antonio dos Santos said. Given the reprieve from the drought, Cooxupe’s president Carlos Augusto Rodrigues de Melo is optimistic that even with the problems reported so far, the next crop will be better than the two previous ones.

Finalizing the 2022 harvest, the cooperative was able to get around 6 million bags of 60 kilograms from both members and third-party sellers, a similar level compared to 2021 but lower than the 8 million from the last good harvest in 2020. The season that just ended was supposed to be a higher-yielding cycle, but instead output was slashed by severe drought.

Despite the arrival of badly needed rains, growers can still expect weather-related challenges. Higher temperatures and wider extremes between the highs and lows are becoming a permanent challenge due to climate change. The uncertainties require constant monitoring and investments at a time growers are finding it hard to spend.

“I made investments in the past that were lost because production was so damaged by weather,” Castejon said. “It hurts me to say, but I may not have the resources to do what is needed now.”