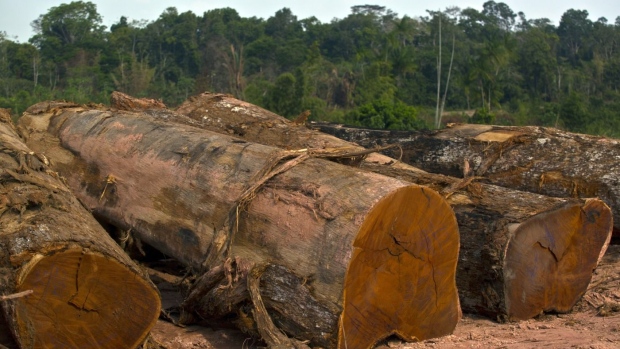 Cut logs sit at a sawmill in Anapu, Brazil, on Thursday, Dec. 18, 2014. The rate of deforestation Brazil's Amazon rain forest dropped 18 percent over the last year, according to a report by the country's environment minister in November. , Simone Iglesias

(Bloomberg) -- US and Brazilian authorities are discussing a cooperation to stop illegal trade of timber from the Amazon, as well as other environmental crimes against the rainforest, according to Brazil’s Environment Minister Joaquim Leite.

“We are focused on preventing the illegal international trade of timber that happens in the region,” Leite said in an interview in Los Angeles on Friday, where he’s attending the Summit of the Americas as part of President Jair Bolsonaro’s delegation. “US support is very important.”

The environmental cooperation was the main topic in a meeting between Leite, Brazil’s Justice Minister Anderson Torres and John Kerry, President Joe Biden’s special envoy for climate, on Thursday evening in Los Angeles.

Leite replaced Ricardo Salles, a controversial former environment chief who’s been targeted by Brazil’s federal police in a probe into alleged irregularities in timber exports. Since taking office, the new minister has been trying to improve relations with the US and revert Brazil’s tarnished environmental image abroad.

The US is also interested in Brazil’s ability to supply the world with green energy, according to Leite. Earlier, Bolsonaro said the Latin American country could become the world’s largest exporter of wind energy and green hydrogen.

“At a time when developed countries resort to fossil fuels, Brazil could take a fundamental role as a supplier of totally clean energy toward a new emission-neutral economy,” the Brazilian president said during his speech at the summit.

In order to make the project viable, Leite said, the government is preparing new rules to allow for the exploration of wind farms along the Brazilian coast, ensuring environmental preservation.