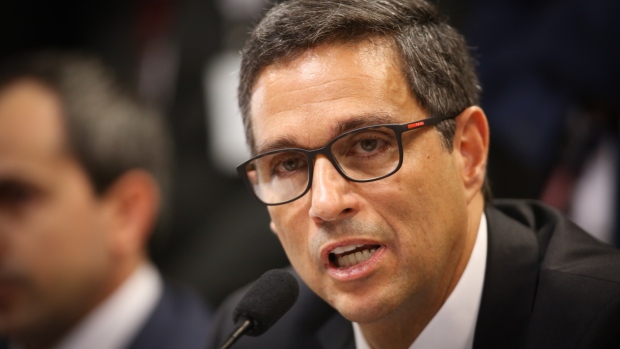 Roberto Campos Neto, president of the Central Bank of Brazil nominee for Brazilian President Jair Bolsonaro, speaks during a confirmation hearing in Brasilia, Brazil, on Tuesday, Feb. 26, 2019. Campos Neto in his initial remarks ticked off several boxes on the investor wish list, such as reaffirming the need for fiscal discipline, inflation control, and central bank autonomy. Photographer: Andre Coelho/Bloomberg , Bloomberg

(Bloomberg) -- Brazil’s central bank held its benchmark interest rate at an all-time low in the first meeting under its new boss and signaled it could lower borrowing costs in the future if growth continues to disappoint.

The bank’s board on Wednesday kept the Selic rate unchanged at 6.50 percent for the eighth straight meeting in an announcement expected by all 39 economists in a Bloomberg survey. It was the first monetary policy decision under Roberto Campos Neto, who was sworn in as head of the monetary authority earlier this month.

In a statement accompanying the decision, the central bank board wrote that the risks driving inflation higher or lower are "symmetric" and that recent economic activity data came in below expectations. Monetary policy should remain stimulative, board members wrote, though further assessment of the economy "takes time and should not be completed in the short run."

Brazil’s central bank joined peers from the European Union to Canada that are grappling with lackluster growth despite low borrowing costs. The decision also comes after the U.S. Federal Reserve scaled back its projected key rate increases earlier on Wednesday, driving up emerging market assets.

At home, President Jair Bolsonaro’s efforts to boost the economy depend on his ability to get enough support for a crucial proposal to overhaul the nation’s pension system.

"The central bank signaled that it could cut the key rate at some point, but it doesn’t mean that their finger is on the trigger," said Newton Rosa, chief economist at Sul America Investimentos Dtvm. "If the economy doesn’t react and if we have advances in reforms by the third quarter, then they may be able to cut."

Several measures of inflation are running at appropriate or comfortable levels, bank board members wrote in their statement. In a signal of continuity, policy makers reiterated the need for “caution, serenity and perseverance,” an expression used by the central bank board under Campos Neto’s predecessor, Ilan Goldfajn.

Campos Neto inherits inflation that’s estimated to remain at or below target in the foreseeable future, due in part to feeble demand. Brazil’s economy is forecast to grow only 2.01 percent this year, according to analysts surveyed by the central bank. Their forecast is down nearly a half-percentage point from three weeks ago.

"The Brazilian central bank is more in-line with what’s happening in the world," said Alessandra Ribeiro, an analyst at Tendencias Consultoria. "It is starting to entertain the possibility of a rate cut, but not in the short-term."

--With assistance from Walter Brandimarte.

To contact the reporters on this story: David Biller in Rio de Janeiro at dbiller1@bloomberg.net;Mario Sergio Lima in Brasilia Newsroom at mlima11@bloomberg.net

To contact the editors responsible for this story: Daniel Cancel at dcancel@bloomberg.net, Matthew Malinowski, Bruce Douglas