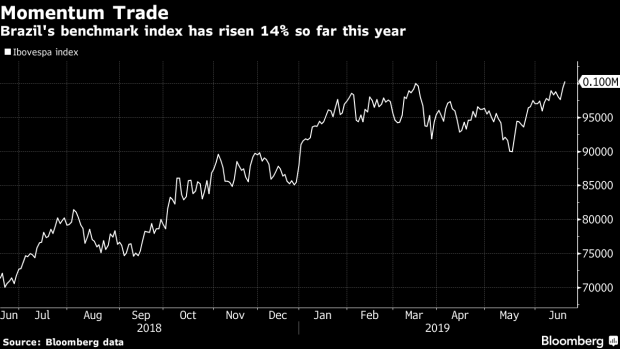 A visitor takes a photograph with a smartphone of the electronic board displaying stock activity at the Brasil Bolsa Bacao (B3) stock exchange in Sao Paulo, Brazil, on Thursday, May 18, 2017. Brazil\'s Ibovespa Index tumbled 7.9 percent, the most since August 2011, as political crisis returned to the country after last year\'s impeachment process. Photographer: Patricia Monteiro/Bloomberg , Photographer: Patricia Monteiro/Bloomberg

(Bloomberg) -- Brazil’s equity benchmark Ibovespa index closed above the 100,000 mark for the first time on record as dovish signals from the Federal Reserve added support to global asset prices, and potentially signaling increased odds for rate cuts in Brazil.

Investors have been seeing increased odds for the approval of President Jair Bolsonaro administration’s flagship social security overhaul as fewer lawmakers seem inclined to vote against it. The optimism regarding the bill -- which is seen as as a key issue in tackling the country’s budget deficit -- has been somewhat countering disappointment with the nation’s slower-than-expected economic recovery.

According to the hedge fund firm Bahia Asset Management, Brazilian stocks are the most attractive asset in the local market and the Ibovespa may gain another 20% by year end to about 120,000. The fund expects growth to pick up from the second half of the year onward and the reform’s advance to unlock other microeconomic measures.

“The most important driver is productivity,” said Will Pruett, a Boston-based money manager at Fidelity. “So I’m looking for micro reforms that address productivity, such as the tax reform and the privatization agenda,” Pruett said.

The perspective of lower rates for a longer period has also been supportive. Economists expect Brazil’s central bank to cut its benchmark interest rate -- which is at a record low of 6.50% -- to 5.75% by the end of the year, according to BCB’s weekly survey.

To contact the reporter on this story: Vinícius Andrade in São Paulo at vandrade3@bloomberg.net

To contact the editors responsible for this story: Brad Olesen at bolesen3@bloomberg.net, Catherine Larkin