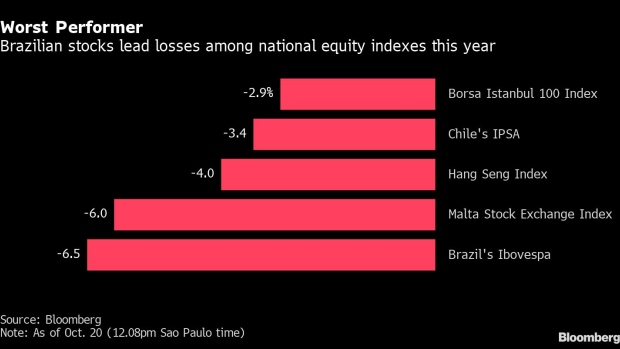 (Bloomberg) -- Brazil stocks have become the world’s worst-performing so far this year, hit by a combination of sluggish growth, higher rates and fears President Jair Bolsonaro may be about to blow up the country’s finances.

The Ibovespa has fallen nearly 7% in local-currency terms since January, more than all national equity indexes tracked by Bloomberg. The drop has wiped out about 570 billion reais ($102.8 billion) in market value since its June peak.

Brazilian stocks plunged Tuesday on reports President  Bolsonaro’s administration will breach the public spending cap rule to fund a new social program. The index clawed back some ground on Wednesday after the government postponed the spending announcement. Still, investors fear the spending limit, seen as a safeguard of fiscal policy, may be in jeopardy.

Earlier this morning, Bolsonaro said Brazil’s fiscal rules will be respected, but fell short of explaining how additional spending can be accommodated within the spending cap.

Local funds had unwound bullish bets on local stocks over the past few months as political tensions surged and the government struggled to solve a budget gridlock. Higher interest rates are also weighing on the outlook, as the central bank has lifted the Selic by 425 basis points since March to tame inflation.

The Ibovespa index, in which commodity-linked names like miner Vale SA and oil producer Petroleo Brasileiro SA have a large weighting, is trading at 8.1 times forward earnings, well below the 10-year average of 11.8 times.

The Brazilian real also rose following Tuesday’s losses, but it is still the worst major currency this week.