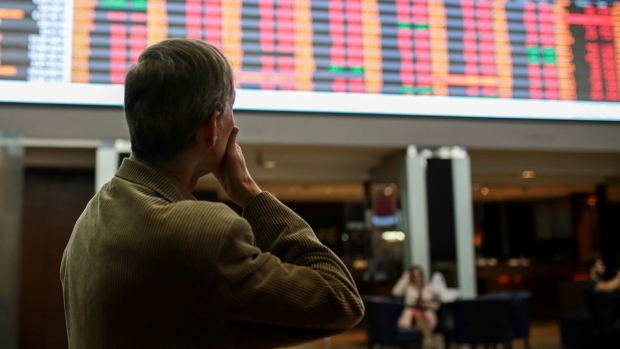 A visitor views the electronic board displaying stock activity at the Brasil Bolsa Bacao (B3) stock exchange in Sao Paulo, Brazil, on Thursday, May 18, 2017. Brazil's Ibovespa Index tumbled 7.9 percent, the most since August 2011, as political crisis returned to the country after last year's impeachment process. Photographer: Patricia Monteiro/Bloomberg , Photographer: Patricia Monteiro/Bloomberg

(Bloomberg) -- Brazilian stocks are poised to enter a bear market amid growing concern over the country’s fiscal outlook and bets on higher interest rates and weaker economic growth.

The Ibovespa fell as much as 3.3% as of 11:36 a.m. in Sao Paulo, extending its decline this week to about 9%, the worst since the early days of the pandemic. The gauge has now fallen 20% from a June peak, entering the technical definition of a bear market if it closes at this level.

Local assets have tumbled in recent days as President Jair Bolsonaro’s administration seeks ways to boost spending ahead of next year’s election and bypass fiscal rules meant to keep budgets in check. Bolsonaro has recently pledged to offer aid to truck drivers and is seeking to change how the spending cap is calculated.

“Brazil’s fiscal deficit has been an ongoing focus of concern for macro investors,” Caesar Maasry, a New York-based emerging-market strategist at Goldman Sachs Group Inc., wrote in a note Oct. 21. “The breaking of spending limits may be a significant break from historical precedent that drives further idiosyncratic risk aversion.”

The threat of increased government spending may compel Brazil’s central bank to embark on more aggressive rate hikes to keep a lid on inflation. It’s next scheduled meeting is Wednesday.

Higher rates, a worse outlook for the economy and greater volatility stemming from the 2022 election race should challenge the outlook for Brazilian stocks over the next 12 months, according to Itau BBA strategists.

The country is heading for a recession next year, according to Gustavo Pessoa, a founding partner at hedge fund manager Legacy Capital.