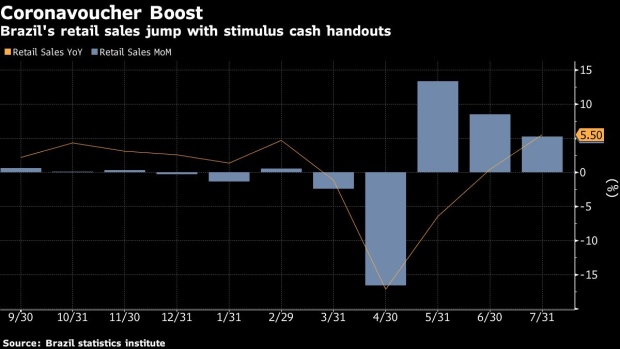 (Bloomberg) -- Brazil is set to hold its benchmark interest rate steady at an all-time low as family consumption firms and price pressures emerge following the economic blow from the pandemic.

The central bank will keep the Selic rate unchanged at 2% on Wednesday after nine prior cuts totaling 450 basis points, as expected by all analysts in a Bloomberg survey. With the economy weakened by the pandemic but flush with stimulus, investor focus is now turning to how long rates will stay at the current level.

Central bank President Roberto Campos Neto has signaled Brazil is on track to grow over 4% next year after outperforming much of the region in 2020. Aside from the monetary boost, the government is spending heavily on measures including job protection programs and cash handouts that are fueling price spikes in staple goods. Still, the recovery of Latin America’s largest economy remains vulnerable to a possible resurgence of the virus, as well as the withdrawal of fiscal stimulus.

The decision will be published on the central bank’s website after 6:00 p.m. local time in Brasilia together with a statement from the institution’s board.

Here’s what to watch out for:

Financial markets will be keen to see how policy makers describe the outlook for consumer inflation amid spikes in the cost of basic products. President Jair Bolsonaro this month asked supermarkets to reduce profit margins on staple goods and also scrapped import tariffs on rice to appease worried consumers. Meanwhile, wholesale prices have been rising fast, raising the prospect that they may be passed on to consumers in the future. Until now, the central bank’s forecasts have shown inflation running below the officials targets of 4% for this year and 3.75% for next. Investors will be on the look-out for any shifts in those estimates.

“The central bank is not going to cut rates, but they may not completely close the door to further reductions in the future. Policy makers should mention pressure from some price gauges as a warning sign, but underscore that both core and headline inflation, as well as consumer price forecasts are all below target. They may also reinforce the forward guidance that borrowing costs won’t go up so soon.”

At the last rate decision in August, policy makers introduced forward guidance by saying they intended to avoid rate increases in the foreseeable future. Several board members have since reiterated that message, though traders still expect borrowing costs to rise as early as the start of next year. Investors will look to see if the central bank alters the language in its message.

“The biggest risk to monetary policy is government spending, which is sustaining demand through emergency programs,” said Patricia Krause, chief economist at Coface.

Private sector economists’ estimates for this year have improved in the past month as pent-up demand and stimulus cash propel retail sales back to pre-coronavirus levels. Still, other sectors such as services are lagging, while government programs have done little to tackle long-withstanding challenges such as red tape and weak investments. Investors will looking for central bank insight on what the recovery means for the future of monetary policy.