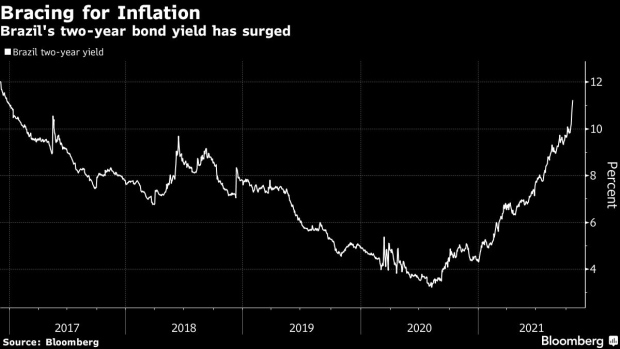 (Bloomberg) -- Rates traders are becoming increasingly skeptical that Brazilian officials can rein in skyrocketing inflation, with new spending plans adding to risks for the nation’s currency and central bank market interventions failing to make much of an impact.

While the Banco Central do Brasil has been among the biggest movers globally in terms of interest-rate hikes and acted directly in the foreign-exchange market, its currency interventions have been clearly flagged ahead of time, potentially blunting their effectiveness in stemming the real’s decline. At the same time, President Jair Bolsonaro is boosting social payments in a manner that looks set to upend rules on the country’s spending-cap, a move that on Thursday prompted the resignation of a swath of senior economic officials.

Even before the mass exodus, the real was down 12% since midyear, the worst performance among major FX markets, and that could go further Friday. The depreciation is likely to only add to local inflationary pressures and fuel bond-market bets on higher short-end rates. The demand for inflation-linked bonds is also growing, with the implied price of consumer price gains over the next two years climbing to 6.1%, a level unseen since 2016.

“We should expect more inflation and, consequently, rates are set to rise,” said Vinicius Oliveira, a spot foreign-exchange trader at Banco da China Brasil. “Fiscal and monetary policies are diverging, creating discomfort in the mid and long-term.”

The yield on two-year Brazilian bonds on Thursday climbed above 11%, a mark last surpassed back in 2016, as sovereign securities sold off for a fourth straight week. Part of that is, of course, related to a global increase in short-end rates fueled by expectations for central bank tightening around the world, but the move in Brazil has been more extensive than most.

The Brazilian central bank is widely tipped to raise its benchmark interest rate by another full percentage point at its meeting next week, although options now suggest a more than 82% chance that the hike could be bigger than that. With a move of 100 basis-points already likely to be behind the curve, it’s likely to take a much more-hawkish-than-anticipated hike and message to help put a floor under the currency.

A key focus is likely to be how central bankers respond to the government’s plans for increased spending and the absence of new economic reforms. A failure to comment much upon this could potentially fuel the sense of them delivering a more dovish message, adding further pressure on the currency and rates.

Bolsonaro and his political allies have outlined plans to increase the size of the Bolsa Familia, the country’s long-standing income-distribution program. But instead of offsetting that with cuts elsewhere, the government will bypass fiscal rules and this has investors on edge.

Brazilian assets tumbled further Thursday following news about the fiscal situation, with the benchmark stock index dropping 2.8% and interest-rate swap contracts surging as traders weighed plans for aid to truckers along with news on the spending cap.

What’s key is not just the already outlined additional spending above the cap from this program, but the fact that it opens the door to other increases. Local newspaper O Globo has reported that parts of the government and Congress are already working on more measures to be left out of the spending cap. And as a result traders are moving asset prices as if the rule no longer existed.

One potential brake on the real’s decline could come from direct central bank action. But while the central bank has deployed plenty of firepower on this front, the way it’s doing it could be muting its impact.

Officials have signaled that they will sell as much as $18.2 billion until the end of the year to offset the dollar demand generated by the hedge adjustments local companies will make to adapt to change in fiscal legislation. On top of that, BCB was making extra swap and spot auctions on a daily basis, selling more than $4 billion in additional greenbacks to curb any intense depreciation swing. But by scheduling the time and size of each intervention, the central bank potentially gives bears greater confidence in not only sticking to their bets, but even using the auctions to add to them. Officials did not announce an auction Thursday and the market is still assessing if it means they will leave the currency to float freely or they will stop pre-announcing the auctions on attempt to increase its market impact.

For now, though, there appears to be little standing between the real and further weakness. And without currency strength to lean against inflation, it appears that bond investors have little choice but to hedge against additional rise in consumer prices and bet on a steeper or longer tightening cycle.