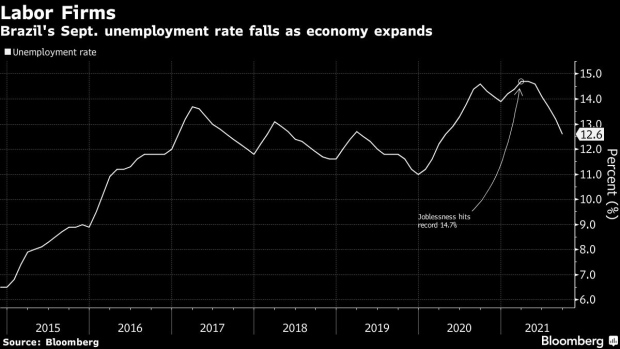 (Bloomberg) -- Brazil’s unemployment fell more than expected, a bright spot in the recovery of Latin America’s largest economy, which has been hindered by double-digit inflation and higher interest rates.

Joblessness slid to 12.6% in the three months ending in September from 13.2% previously, the national statistics institute reported on Tuesday. The figure was slightly below the 12.7% median estimate from analysts in a Bloomberg survey.

The labor market is slowly recovering from historic lows brought on by the pandemic. Much of the gains have occurred in the informal sector, and millions of Brazilians remain out of work. Complicating matters, inflation running at nearly 11% and higher rates are weighing on next year’s growth outlook.