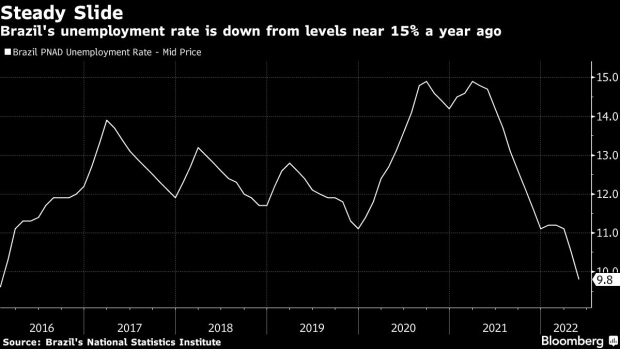 (Bloomberg) -- Brazil’s unemployment rate fell more than expected amid steady job creation, adding to signs that Latin America’s largest economy picked up at the start of the year as the presidential election race heated up.

The jobless rate fell to 9.8% in the three months through May, the national statistics institute reported on Thursday, below the 10.2% median estimate from economists in a Bloomberg survey. It was the lowest since January 2016.

Economic issues such as jobs are front-and-center as incumbent Jair Bolsonaro and top challenger Luiz Inacio Lula da Silva organize their presidential campaigns. Many analysts have raised their 2022 growth forecasts as cash handouts boost consumption. Still, companies in need of workers are being pinched by double-digit borrowing costs and inflation rates.

The number of unemployed people stood at 10.6 million, down 30.2% from a year prior, according to the statistics institute. Meanwhile, the number of employed workers rose to 97.5 million, the highest in the data series that started in 2012.

Brazil created roughly 277,000 formal jobs in May, according to separate government data released Tuesday, above the median forecast of about 181,000 posts.