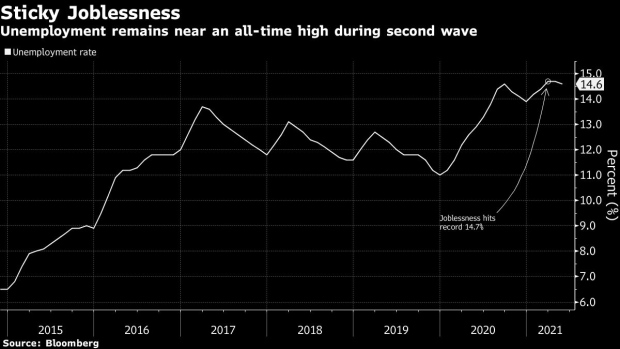 The jobless rate slipped to 14.6% in the three months ending in May, above the 14.5% median estimate from analysts surveyed by Bloomberg, the national statistics institute reported on Friday. Unemployment had stood at a record 14.7% since March, when businesses closed their doors and local governments placed restrictions on movement to fight a surge in coronavirus infections. The data series goes back to 2012.

Health officials have slowly expanded vaccine access, boosting the economic outlook and allowing many people to return to work. Still, policy makers have voiced concern over weak job growth and fast inflation, while the spread of new virus variants raises prospects of a third wave. Roughly 19% of Brazil’s population is fully inoculated, according to Bloomberg’s Vaccine Tracker.