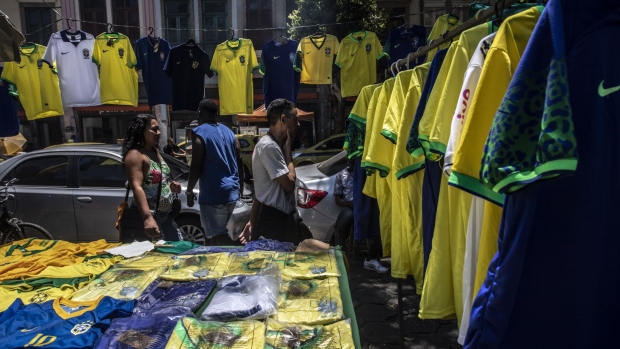 (Bloomberg) -- If a deeply polarizing presidential election wasn’t enough to tear Brazilians apart, the World Cup is posing a new identity test: whether to wear their most-prized shirt.

The Brazilian national football team’s canary yellow and green jersey has become the choice accessory of supporters of outgoing President Jair Bolsonaro. So closely is the shirt associated with the right-wing leader, that many fans are ditching it as they cheer on Brazil in this year’s tournament. The team, who are favorites to win, will play their first match against Serbia on Thursday.

“The future is blue,” William Enrique, who hawks jerseys in downtown Rio de Janeiro, said of Brazil’s secondary shirt. Pointing to a pile of unsold yellow jerseys, he added: “Buyers will tell me, ‘That’s Bolsonaro! Gimme the other one.’”

Worn by football greats like Pele and Ronaldo when they helped Brazil bring home its five World Cups, the iconic yellow uniform is a symbol of the country’s dominance of the sport. But it’s also being donned by Bolsonaro faithful at rallies, and as they take to the streets to protest President-elect Luiz Inacio Lula da Silva’s recent victory in the polls.

Celso Unzelte, a sports journalist and commentator, says the embrace of the national colors is a throwback to Brazil’s military government, which left power in 1985. But under Bolsonaro, a former army captain who has openly celebrated that regime, the adoption of the yellow shirt has been much more polarizing.

“In the cup of ‘82 there was a dictatorship and we still wore the jersey,” Unzelte said. “It didn’t suffer like now.”

The national football federation, or CBF, is trying to wash the politics out of the famous shirt. It rolled out a video campaign ahead of the tournament aimed at depoliticizing the amarelinha, as the kit is known in Brazil. The video shows cheering fans clad in the amarelinha accompanied by a rap song with the lyrics “Let’s love her,” which in Portuguese also means “Let’s go yellow!”

“We can all feel good about the national team’s jersey,” CBF President Ednaldo Rodrigues said earlier this month upon unveiling the campaign. A poll published last week by news site Metropoles found that isn’t quite true, with just over a quarter of Brazilians saying they won’t wear the amarelinha.

Walter Casagrande Jr., a one-time forward on the national team put the sentiment of many of the president’s critics on the left bluntly in an op-ed: “Jair Bolsonaro’s far-right has destroyed everything in its path, including the affection we had for the yellow jersey.”

But players are just as split as the fans. “What I see is that over the past four, five years the current president revived the pride in being Brazilian,” Gilmar Rinaldi, a former goalkeeper who formed part of the ‘94 World Cup winning squad, said in an interview.

Depoliticizing efforts are also complicated by the fact that Brazilian superstar Neymar is an outspoken backer of Bolsonaro and has promised to dedicate his first World Cup goal to the outgoing president.

“It’s sad it’s come to this,” said Pedro Lindackee, 21, a business administration student sporting an amarelinha on Rio de Janeiro’s metro. “I voted for Lula, but I don’t think politicians should mix with sport.”

Others are trying to salvage the shirt for their side.

“It’s up the young people to take it back,” Pinho said.

For his part, Lula has already promised to wear yellow during the tournament. And many Brazilians in Qatar are following suit.

“The country is divided and Bolsonaro used the shirt for political purposes,” said a yellow-shirted Wallace Leite, who banged on a drum entertaining locals with a half-dozen other amarelinha wearing fans on the eve of the World Cup. “Now there’s an opportunity to reclaim it.”

--With assistance from David Hellier and Daniel Carvalho.