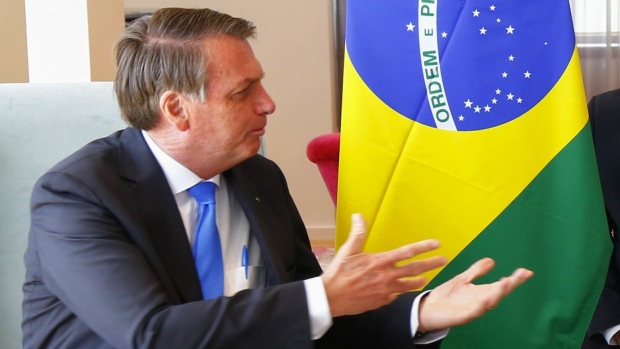 NEW YORK, NEW YORK - SEPTEMBER 20: Brazil’s president Jair Bolsonaro and British Prime Minister Boris Johnson sit for a bilateral meeting at the UK diplomatic residence on September 20, 2021 in New York City. The British prime minister is one of more than 100 heads of state or government to attend the 76th session of the UN General Assembly in person, although the size of delegations are smaller due to the Covid-19 pandemic. (Photo by Michael M. Santiago-Pool/Getty Images) , Photographer: Michael M. Santiago/Getty Images North America

(Bloomberg) -- A member of Brazilian President Jair Bolsonaro’s delegation to the United Nations was put in isolation after testing positive for Covid-19 in New York, adding to concerns that the general assembly this week could trigger a spike in coronavirus cases in the host city.

The diplomat, part of a mission that preceded Bolsonaro’s arrival, had tested negative before leaving Brazil, according to a person familiar with the situation at the Brazilian foreign ministry. The person, who requested anonymity and isn’t authorized to discuss the matter in public, said the diplomat didn’t have contact with president.

Brazil’s foreign ministry is now tracking dozens of people with whom the person has been in touch in New York, the Brazilian press reported, citing unnamed diplomatic sources. Bolsonaro himself has refused to get a Covid shot, saying he still has antibodies from a previous infection last year.

Bolsonaro is the only leader of a member of the major economies that comprise the Group of 20 nations who hasn’t been vaccinated. Bolsonaro’s office and Brazil’s foreign ministry didn’t respond to requests for comment.

The possibility that foreign diplomats visiting New York this week could arrive infected became source of friction between New York officials and the UN. Penny Abeywardena, the city’s International Affairs Commissioner, wrote a letter to the UN General Assembly president noting that under New York rules, proof of vaccination should be required for entering UN headquarters. But UN Chief Antonio Guterres told Bloomberg in an interview that an honor system will be used, meaning diplomats who swipe into the building are attesting to having been vaccinated.

“We need to send a message to all the world leaders, including most notably Bolsonaro from Brazil, that if you intend to come here you need to be vaccinated,” he told journalists. “If you don’t want to be vaccinated, don’t bother coming, because everyone should be safe together.”

Bolsonaro, who is scheduled to be the first head of state to address the assembly on Tuesday, has so far skirted New York’s Covid regulations requiring proof of vaccination to enter closed spaces. On Sunday night he was photographed with his entourage eating a slice of pizza on the sidewalk outside a Manhattan restaurant.