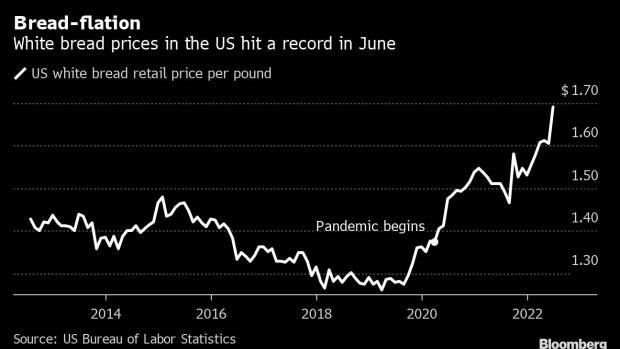 (Bloomberg) -- People really begin noticing inflation when it shows up in things that they regularly buy. That’s why gasoline and milk get so much attention. Add bread to a growing list of basics that are rising in price and crushing consumer sentiment.

Amid the highest US inflation in four decades, bread prices have soared this year, pushing more premium options to an unheard-of $10 a loaf and beyond.

“It’s kind of like a punch in the nose,” said Mark Cohen, director of retail studies at Columbia University. These are prices “nobody has seen before” and have the same impact as gasoline hitting $5 a gallon, he said.

The big question with the US economy is how long can consumer demand hold up amid such inflation. When shoppers are worried about their finances, they traditionally cut back on discretionary items, and they are doing that (see Netflix and Peloton).

But the cracks in demand are spreading to basic goods. Shoppers are skipping the bread aisle, with unit purchases from US grocers declining 2.7% over the past year through July 2, according to data from NielsenIQ. Americans have also bought less milk and eggs from retailers over the same period, though a portion of all these declines can be chalked up to a return to eating out.

Two major producers of packaged goods said last week that they are seeing waning demand. At PepsiCo Inc., price increases have hurt volume, including declines last quarter in North America for its beverages — which span soda to juice — and snacks. Conagra Brands Inc., the maker of Slim Jim jerky and Hunts tomato sauce, plans to keep raising prices even while acknowledging that those hikes led to a 6% drop in units.

All this is weighing on Krista Hoffman, a 29-year-old self-described stay-at-home mom with three kids. She plans meals around weekly deals and digital coupons, but that hasn’t stopped her from cutting out items like juice boxes that have gotten too expensive. Rising meat prices have also pushed her to buy cheaper ground beef and plan more meatless dinners.

Hoffman, who lives in Brownsburg, Indiana, said in a message that the situation has left her stressed. “I feel like the month just started, and I’ve spent $650 on groceries already.”

In the past few weeks, prices for gasoline and other commodities have declined, offering some hope that inflation is cooling. But bread could stay elevated longer because it has specific pressures beyond the rising costs for transportation and labor that are affecting nearly everything.

Russia’s invasion of Ukraine disrupted two of the world’s biggest wheat exporters, sending prices to the highest on record. Climate change is leading to more erratic and extreme weather, including droughts. Wheat has also been losing acreage in the US for years as farmers switch to more lucrative crops, like corn, that can be used for biofuels.

The nearly $50 billion US bread industry was already facing the threat of shifting consumer tastes, thanks to the increasing popularity of gluten-free diets, according to researcher IBISWorld. Now there are worries that these price hikes help usher in another boom in carb cutting like the South Beach Diet craze of the early aughts. Meanwhile, restaurants may offer less free table bread or slash portions.

In Chicago’s Logan Square neighborhood, husband-and-wife team Taylor and Brian Bruns are trying to stay profitable at their mountain-themed restaurant, Flat & Point. This spring, they ramped up their baking to begin selling loaves of sourdough and whole wheat at farmers markets across the city.

The couple priced their 2-pound loaves at $10, hoping to offset higher flour costs, but also because of surging prices for eggs and butter. While the price tag has turned off some shoppers at the farmers market, it’s fair because they use pricier organic ingredients, according to Taylor Bruns.

In the days after Russia’s invasion of Ukraine in late February, wheat futures in Chicago touched the highest price ever with more than a quarter of global exports at risk. Soybean oil, a common bread ingredient, also surged.

Prices have declined since then, especially lately amid concerns of weaker demand. However, US-traded benchmark wheat is still more than 15% higher than a year ago. Last month, global wheat prices were almost 50% higher after soaring to a near-record in May, according to the Food and Agriculture Organization of the United Nations.

Falling prices will take time to work through system because most baked-bread companies buy ingredients months in advance.

There are also looming threats from drought.

If realized, the latest US production estimate for hard red winter wheat, relied on to make bread flour, would be the lowest since at least the mid-1980s due to a lack of rain. The size of the crop being harvested in states like Kansas has been slashed after drought that baked fields farther north last year hit parts of the Central Great Plains.

There is more volatility coming in wheat and bread prices that will likely last well into next year — if not longer, according to Arlan Suderman, chief commodities economist at StoneX Financial.

Back in Chicago, La Boulangerie & Co., a bakery and cafe with four locations, recently raised menu prices by about 10% to offset higher expenses that spanned butter to refrigerator repairs. The chain increased the price of its baguettes by 50 cents to about $4, and its loaf of brioche has hit $11.50.