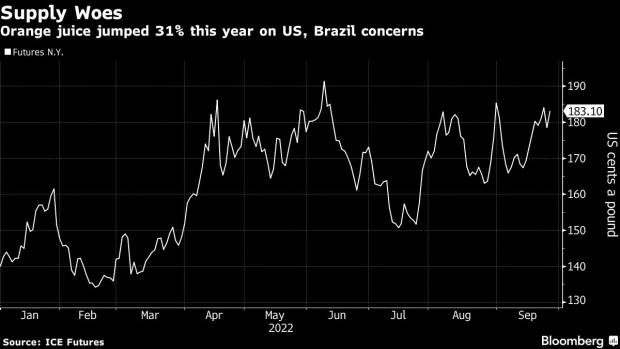 Fruit sits on the ground below orange trees at the Alico Inc. Lake Patrick Grove in Frostproof, Florida, U.S., on Monday, Sept. 11, 2017. Hurricane Irma smashed into Southern Florida as a Category 4 storm, driving a wall of water and violent winds ashore and marking the first time since 1964 the U.S. was hit by back-to-back major hurricanes. , Bloomberg

(Bloomberg) -- Cotton headed for its worst month in more than three decades as fears of a global economic slowdown threatens to stifle demand for apparel and other goods.

While supply concerns are mounting, cotton futures traders have been focusing more on the weak outlook for demand amid prevailing bearish macroeconomic sentiment, said Nick Gentile, partner for NickJen Capital Management. Higher interest rates are likely to reduce consumers spending on apparel, while recent strength in the US dollar could curb the global appetite for the country’s exports.

The pullback in prices for the raw material may slow one pocket of inflation for consumers, and ease some of the crunch on clothing makers that had been squeezed by rising costs and customers with less spending power.

Industry group Cotlook raised its estimate Friday for the global surplus in 2022-2023 to 452,000 tons, from just 12,000 tons in its previous outlook last month, with lower demand in Turkey and the Indian subcontinent outweighing shrinking harvests in India and Pakistan.

The US currently holds 13.4 million bales that have yet to find their way to consuming markets, Plexus Cotton said in a Thursday report. “Mills are burdened with inventories and are running at slower than usual rates.”

Prices continued to slump even as Hurricane Ian makes its second big strike on the US, with heavy rains set to damage cotton crops in the Carolinas. At least 20% of cotton bolls at the crops could be destroyed, said Chief Operating Officer for Commodity Weather Group David Streit.

South and North Carolina produce about 7% of US cotton. Main producer Texas has seen its crops harmed by severe drought, which sent prices surging earlier this year.

“Most of the crop is open bolled and not yet harvested, so there would be extensive quality loss,” Streit said. In South Carolina, where strongest winds might be concentrated, damage could be even higher, as much as about 30%, he said. The area is expected to dry out through next week.

Risks to US supplies and quality are becoming amplified, said Walter Kunisch, senior commodities strategist at Hilltop Securities Inc. “The cotton market is ignoring the glaring obvious growing structural supply deficit in the US, and hurricane Ian will exacerbate these concerns.”

On other softs, orange juice was down, still gaining 3.5% this week on the impacts of Ian to Florida citrus crops. Arabica coffee and sugar also moved down in New York.