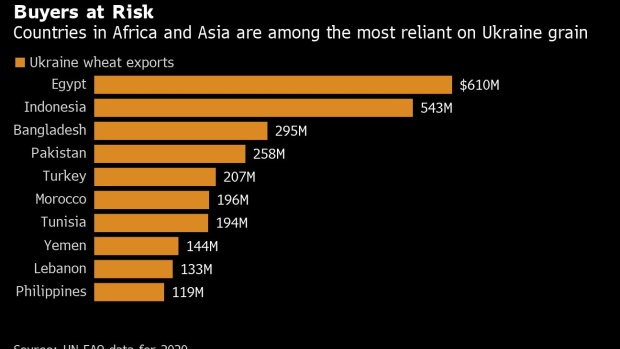 (Bloomberg) -- A dearth of funding coupled with a surge in inflation is forcing hunger-relief programs across the globe to cut back on services just as the world’s poorest need it most, creating a situation that will erode human welfare and possibly plant the seeds of political instability.

Stresses on international food aid are happening both at the government level and for organizations including the World Food Programme, the group that just two year ago won the 2020 Nobel Peace Prize for its hunger-fighting efforts. Russia’s invasion of Ukraine has further strained the global food market, which was already reeling from the pandemic and climate change. Wheat futures, for example, have surged more than 50% this year, making the grain less affordable for use in staples like bread.

Children in parts of Kyrgyzstan now only get subsidized meals during school two or three days a week, instead of five. In Somalia, the World Food Programme halved the numbers of schools covered by its meal program. In Syria, the aid group recently cut the daily rations it supplies by a third, down to 1,000 calories a day.

The World Food Programme forecasts that in the 81 countries where it works another 47 million people will suffer acute hunger by the end of the year — a 17% increase — if the war in Ukraine continues.

“When you are talking to people, they can’t cope anymore — they are really at a breaking point,” said Corinne Fleischer, regional director of the Middle East and North Africa for the World Food Programme.

Fleischer expects that in her region alone an additional 6 million people will become food insecure over the next six months if the war in Ukraine continues.

“We are getting very worried because in 2011 this is how the Arab Spring started,” she said. “Hunger drives conflict, and conflict drives hunger.”

Global hunger has been surging since the start of the pandemic. Last year saw a 25% jump in the number of people so deprived of food that it posed an immediate threat to their lives or livelihoods, according to estimates from the Global Network Against Food Crises, an alliance of international aid organizations.

Why Food Prices Are Rising

A combination of higher shipping costs, energy inflation, fertilizer shortages, extreme weather and labor tightness means it’s more difficult to produce food. And Covid’s lasting economic blow made it harder for the world’s poor to afford adequate diets as prices soar. The war is now tipping the situation into a full-blown crisis. Russia and Ukraine are major wheat, fertilizer and food producers, so hostilities are severely disrupting output and delivery from Black Sea ports.

Read more: The world’s next food emergency is here

Going back to the days of the French Revolution, food insecurity has sent people into the streets demanding better conditions. In 2008 and 2011, soaring prices triggered food riots in more than 30 nations across Asia, the Middle East and Africa. Of course, it’s impossible to predict exactly when and where social unrest will occur — and sometimes even when conditions seem ripe, it doesn’t materialize.

Robert Kahn, an analyst with the political-risk consultancy Eurasia Group, said that for the moment he doesn’t see anything as “systemic and far-reaching” as what developed out the Arab Spring, at least not yet.

“We see governments at risk because of their inability to provide food and for the basic needs of their population,” he said.

International development agencies have unveiled an action plan to address the growing food crisis. The initiative is largely a set of pledges to ramp up existing aid programs. Meanwhile, the US Senate on Thursday passed a more than $40 billion Ukraine aid package that includes a $5 billion increase in global food and humanitarian aid.

But those efforts are likely to fall short of the need. The World Food Programme alone projects an $11 billion funding gap this year.

Record food prices are especially hitting Africa, the Middle East and parts of Asia that rely heavily on food imports.

In many parts of Kyrgyzstan, where some kids are getting fewer school meals, children are also getting snacks such as buns and tea for school meals instead of hot, cooked food. In other places, schools have replaced meat with beans.

For the global poor, school meals may provide the equivalent of 10% of household income per child, according to a 2009 World Bank estimate. The meals are also an important incentive to keep children in school, particularly girls, whose costs may otherwise be offloaded from financially strapped families by marrying them off or sending them to work, said Carmen Burbano, director of the World Food Programme’s school-feeding division.

Before Covid, such programs covered 388 million children globally, half the world’s primary school kids. In March, 56 million fewer children were receiving meals, according to the World Food Programme.

Countries are facing rising global interest rates on top of higher food and energy costs. That has already pushed Sri Lanka into debt default, while other emerging economies are in immediate danger of following suit.

One sub-Saharan African government with 5 million children in its school meal program is delaying payments to 10,000 local vendors who provide supplies because of debt distress, Ehsani said.

“I am genuinely concerned that these cuts to school-meal programs are only the beginning, and we anticipate future cuts if debt relief or restructuring is not considered,” he said.

“This is jeopardizing livelihoods.”