Oil extended gains from the biggest jump in five months as China’s success in stamping out virus flare-ups boosts optimism of a demand recovery.

U.S. oil futures rose 2.9 per cent while Brent topped US$71 a barrel. Crude clung to gains after an industry-funded group reported after the close that stockpiles fell last week. China has rapidly brought local virus cases down to zero and road traffic is showing signs of recovery. The country also reopened its Ningbo port, one of the busiest in the world, after a two-week shutdown. 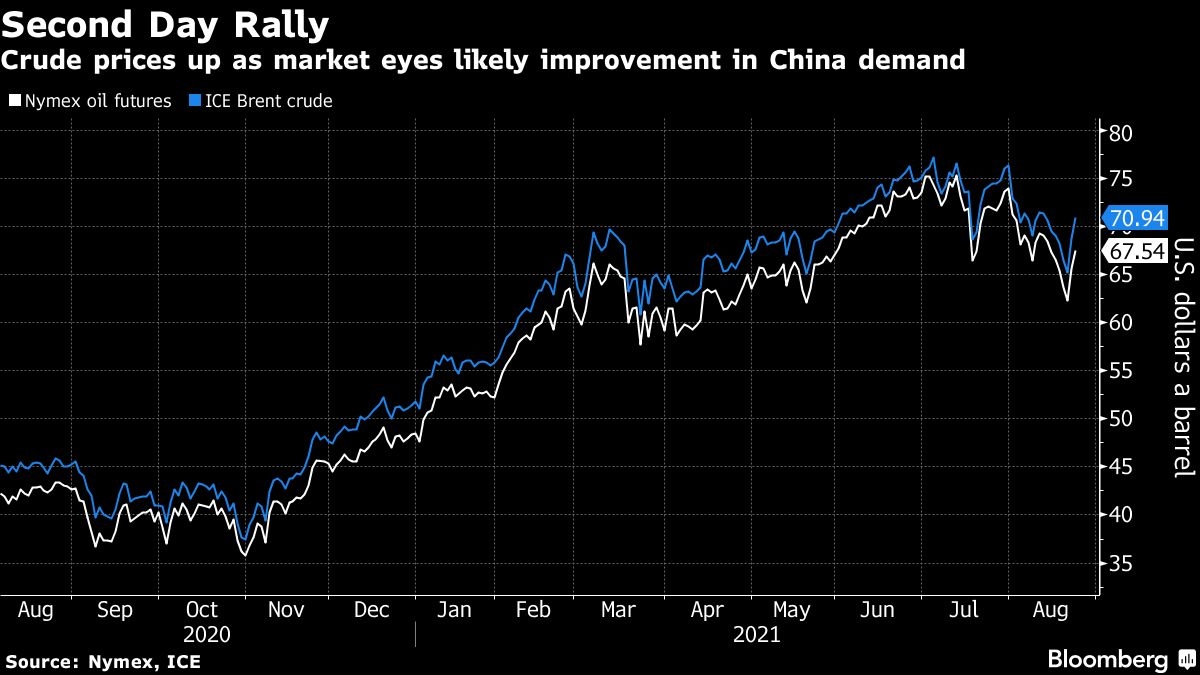 Meanwhile, a fire on a Mexican oil platform wiped out more than 400,000 barrels a day of the nation’s output, roughly equivalent to what OPEC+ will discuss adding back to the market when it meets next month.

COVID’s resurgence has interrupted oil’s rally and prompted speculation that OPEC+ may reassess its current plan to return additional barrels to the market when it meets Sept. 1. Goldman Sachs Group Inc., however, reiterated that the demand impact from delta would be transient, while UBS Group AG sees Brent crude recovering to US$75 a barrel on market tightness.

This week’s rally has coincided with a sharp strengthening in timespreads that indicate prompt demand. The difference between the nearest two December Brent futures contracts jumped by US$1 a barrel in the past two days. Gains in the global benchmark increased its premium to WTI to the widest since April.

Later this week, investors will also be considering the Jackson Hole symposium -- being held virtually from Thursday -- which may offer insights into how the Federal Reserve plans to scale back stimulus.

Meanwhile, the  American Petroleum Institute reported a 1.622 million decline in U.S. crude stockpiles, and a nearly 1 million drop in gasoline stocks. The group also reported a 245,000 barrel dip in distillate stocks last week, which if confirmed by the U.S. government Wednesday, would be the smallest drop since January.

Despite the positive strides against the Delta variant, hurdles still remain to restoring demand. Chinese airlines plan to operate the fewest flights in August since February, according to data from Cirium. In Malaysia, rising infections are threatening to aggravate shortages of semiconductors and other components that have hammered automakers for months.