We must start worrying about the cost of energy crisis: Wellington-Altus Private Counsel's Pelletier

Brent slipped from a three-year high above US$80 a barrel, dragged lower by a tumble in U.S. equities.

The international crude benchmark closed 0.6 per cent lower after briefly rising above the key, psychological level for the first time since October 2018 on Tuesday. West Texas Intermediate crude declined 0.2 per cent after five straight sessions of gains. Equity markets weakened amid warnings that a U.S. default due to a failure to raise the debt ceiling would have catastrophic consequences.

“It got ugly in the equity space and the interest rate environment got stronger this morning too,” said Bob Yawger, director of the futures division at Mizuho Securities USA. “Those two facts conspired to tank the market here.”

Oil’s earlier upswing followed a flurry of bullish price predictions from banks and traders and speculation the industry isn’t investing enough to maintain supplies. The jump to US$80 is adding inflationary pressure to the global economy at a time when prices of energy commodities are soaring. 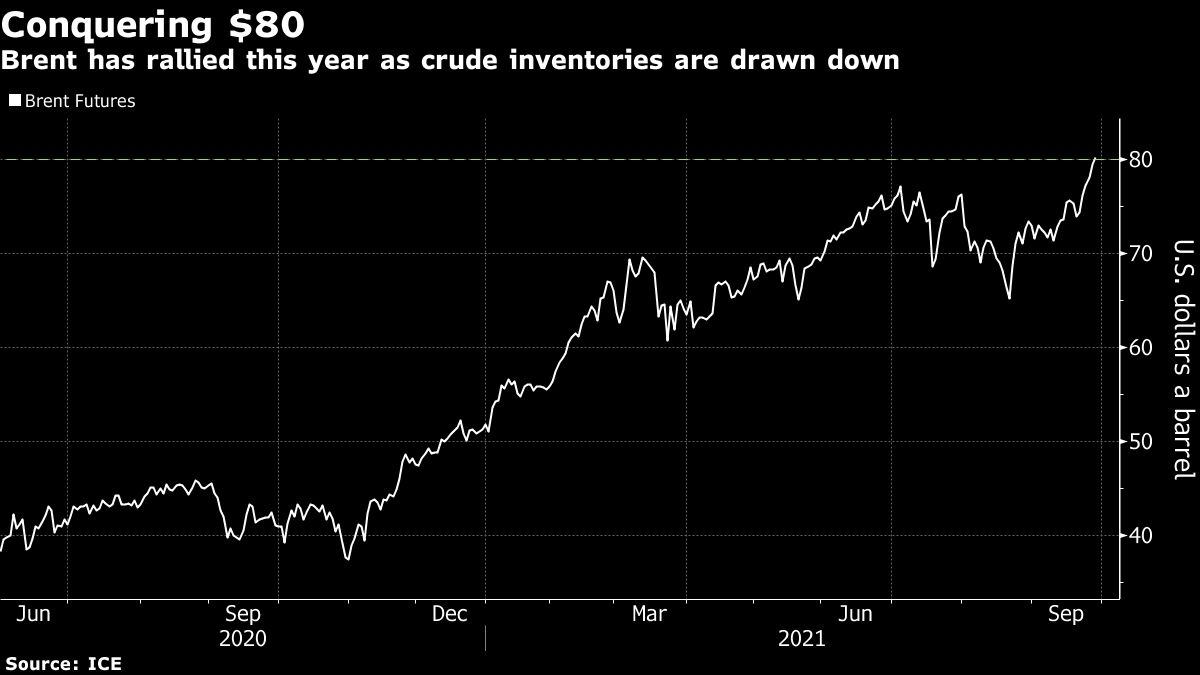 Oil has rebounded from its eye-watering collapse last year amid record output curbs from the OPEC+ producer group and a global economic recovery that has boosted demand. Prices could hit US$90 this year as stock drawdowns deepen, Goldman Sachs Group Inc. says, while Bank of America Corp. has talked up an outside chance of hitting US$100 over the winter.

Oil is “on an upswing of demand recovery” as the pandemic retreats and more countries open their borders to travel, OPEC Secretary-General Mohammad Barkindo said in an interview with Bloomberg Television.

Barkindo said demand will continue to increase though warned the recovery could still be “bumpy.” OPEC+ will “continue to do what it knows best”, when it meets on Oct. 4, which is “how to keep the market in balance.”

OPEC+ may even need to consider increasing production by more than its current plan of 400,000 barrels a day per month, Chris Bake, head of origination at Vitol Group, the world’s largest independent oil trader, said in a webinar.

The oil market is a “different picture from the one that was there a month or six weeks ago,” Bake said. “Demand has been good. Oil substitution is happening a lot as natural gas just runs and spirals pricing-wise.”

Much of the outlook for the rest of the year is likely to hinge on just how cold the northern-hemisphere winter gets. Analysts and consultants have published a range of estimates for how much demand could be boosted by soaring gas costs and frigid temperatures, swinging from a few hundred thousand barrels a day to 2 million.

Oil has also managed to recover despite jet fuel -- a key component of demand -- remaining hobbled by the pandemic. Yet other pockets of consumption have rebounded strongly, including fuels used to make plastics and those used in manufacturing processes, such as diesel. Global oil consumption is expected to return to pre-pandemic levels in the third quarter of 2022, President of BP Singapore Eugene Leong said in an interview.

The rally also has the potential to menace the recovery in consumption, according to Morgan Stanley analysts Martijn Rats and Amy Sergeant. Diesel prices expressed in the local currencies of Brazil, Mexico, Turkey and South Africa are close to or above levels when Brent was at US$110 a barrel, they said, suggesting there could be some demand erosion.

With prices now around US$80 a barrel, forward values are also surging. WTI for 2022 is trading close to US$71 a barrel. Gains in forward prices in theory make it more attractive for producers in the U.S. to lock in production, but growth has been limited this year as investors push for returns to shareholders instead of higher output.

“In oil we’re over US$80 a barrel this morning on a Brent basis, and we look at the rig counts in the U.S. and other parts of the world, they’re showing you that, hey, US$80 a barrel is simply not enough,” Jeff Currie, head of commodities research at Goldman Sachs, said in a Bloomberg Television interview. “There’s always some investor somewhere in the world that will put capital to work if the returns are high enough. The question is where is that number.”

Meanwhile, in the U.S., crude inventories are expected to deplete further after seven straight weeks of declines. Nationwide stockpiles dropped 2.5 million barrels last week, according to a survey of analysts ahead of U.S. government data on Wednesday.