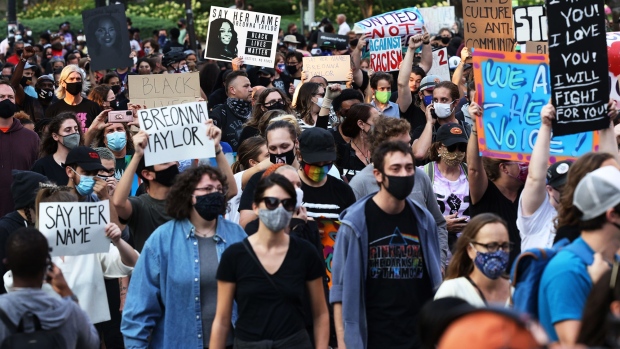 People prepare to march for the third day since the release of the grand jury report in Louisville, Kentucky on Sept. 26. , Photographer: Michael M. Santiago/Getty Images

(Bloomberg) -- A court in Louisville, Kentucky, took the unusual step of releasing recordings of 20 hours of testimony presented to the grand jury that decided not to bring murder charges against police officers who shot and killed Breonna Taylor, a 26-year-old Black woman, in her apartment.

The decision by the 12-member grand jury not to indict the two officers who shot Taylor sparked outrage and widespread protests. A third officer was charged with firing shots that endangered Taylor’s neighbors.

While grand juries normally review cases in secret, one juror asked a judge to release the recordings of the proceedings. The juror said Kentucky Attorney General Daniel Cameron, at a Sept. 23 press conference, had laid the decision not to charge the officers at the feet of the grand jury and that Cameron had failed to answer questions about what possible charges the jurors were presented.

A judge ordered the audio released, but gave Cameron’s office until noon Friday to first redact information from the recording, including names and addresses. In a court notice Friday, Cameron said the redactions amounted to 3 minutes and 50 seconds.

Taylor had been the center of the #SayHerName campaign highlighting police brutality against women. Protesters took to the streets of Louisville, which had been placed under a state of emergency, shortly after the decision was announced.

Former Louisville police officer Brett Hankison faces three counts of first-degree “wanton endangerment” for firing his weapon into neighboring apartments but not specifically for shooting Taylor. He has pleaded not guilty.