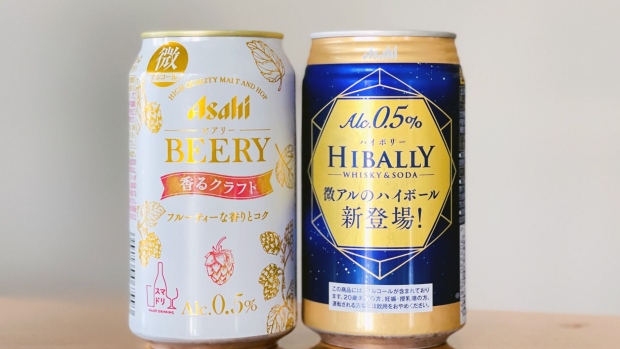 (Bloomberg) -- Japan’s brewers, battered by the drop-off in restaurant and bar sales during Covid-19 restrictions, are tapping into a new growth area: beer and canned cocktails with little-to-no alcohol that are becoming more popular among health-conscious consumers.

Asahi Group Holding Ltd.’s Beery and Sapporo Holdings Ltd.’s Drafty both contain less than 1% alcohol, compared with 5% or more for mainstream brews. “People are trying to be healthier and drink less,” Mizudho Kajiura, head of new brand marketing at Asahi, said in an interview. “We have to meet this demand.”

Japan isn’t the only place where these alternate ready-to-drink beverages are taking off, as consumers seeking to drink less choose moderation over abstention, said industry researcher IWSR. Consumption of low- and non-alcoholic drinks is projected to climb 31% across 10 major markets through 2024, including the U.S., Australia and France, according to the firm.

“This is creating a new drinking opportunity for people who like to drink beer,” Hitomi Okazaki, who leads Sapporo’s beer and ready-to-drink marketing group, said in an interview. “It’s helping people who want to have one drink during their spare time, or one more after drinking beer. Regular beer drinkers are spending more, buying this product on top of what they have been buying.”

Low-alcohol drinks are generally considered to contain less than 3% alcohol, and consumers are drinking less to stay healthy, coupled with factors such as the pandemic, an aging society and a desire to avoid hangovers.

While 20 million people in Japan are estimated to drink on a daily basis, there remains a potential market of 80 million that can be reached via none-to-low alcoholic drinks, Asahi’s Kajiura said.

Asahi also markets a low-alcohol highball-taste drink called Hibally and a series of non-alcoholic cocktails with flavors that are usually combined with spirits, such as lemon and cassis. Coca-Cola Bottlers Japan Holdings Inc. also sells a low-alcohol fizzy lemon drink.

Asahi’s sales of low- and non-alcoholic drinks rose 41% in September from a year earlier, the seventh straight month of double-digit growth. The brewer is seeking to triple the portion of sales of the new category to 20% of the volume of its entire alcohol business by 2025.

Operating profit from Asahi’s liquor business dropped 42% to 20 billion yen ($176 million) in the first half ended June as restaurants and bars adopted restrictions on hours and the serving of alcohol.

Sapporo reported an operating loss of 2.8 billion yen for the first half for its alcohol business, for the same reasons as Asahi, compared with a loss of 7.8 billion yen a year earlier.

Shares of Asahi jumped 45% in the past year and Sapporo has advanced about 36%, outpacing the benchmark Topix Index, which is up about 25% in the same period.

The immediate impact on earnings may be limited, said Hiroshi Saji, a consumer analyst at Mizuho Securities Co. “But in the long run, it’s important to tap the market.”